Many of us like to imagine what it would be like to be a wild animal. How easy life would be if we didn't have to worry about homework, sports practices in the snow, and other similarly unpleasant things. The truth is that being a wild animal is no picnic in the park. Meet Gem, a toad who faces many dangers as he moves from place to place. 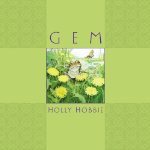 Gem
Holly Hobbie
Picture Book
For ages 5 to 7
Little Brown, 2012, 978-0-316-20334-0
Gram is experiencing a particularly cold winter, and while the snow piles up around her house, and the north wind howls, she starts to think of spring. She remembers the day when her granddaughter Hope found a toad, “a small wonder,” in the garden. Gram decides to create a book about the journey made by  the toad, who was called Gem.
On a warm spring day Gem pushed his way out of the ground and he set off to explore. He crossed the wide expanse of a road and he almost got flattened by a passing car, which was a terrifying experience.
Up a dirt road he hopped until he came to a pond, where he set about singing his spring song. His melody attracted the attention of a pretty little toad lady, and it wasn’t long before Gem was surrounded by many little toad children. One would think that this would be more than enough of an adventure for a toad, by Gem’s journey was not yet over.
In this truly beautiful picture book, two letters serve as a frame for a wordless illustrated tale. We share in a toad’s adventures as he copes with cars, birds of prey, and other dangers. It is thrilling to see the world from the toad’s point of view, and we come to appreciate was a gem he is.
At the back of the book Holly Hobbie provides readers with some facts about toads.
Posted by Marya Jansen-Gruber at 4:00 AM