On this day in 1969, a rocket called Apollo 11 blasted off into space taking three men to the moon. It was an incredible journey, one that was watched by millions of people all over the world. Today's picture book tells the story of this journey in beautifully spare rhyming verse that is accompanied by wonderful illustrations. 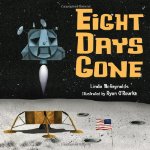 Eight days gone
Linda McReynolds
Illustrated by Ryan O’Rouke
Nonfiction Picture Book
For ages 5 to 7
Charlesbridge, 2012, 978-1-58089-365-7
It was a hot day in July in 1969 when hundreds of people gathered to watch Apollo 11 blast off into space. Out in space, the three astronauts on board watched the “Shrinking planet” that was their home getting smaller and smaller as they headed for the moon.
As they got closer to their destination, the three men began to prepare. They donned their “bulky suits,” and the other special clothing that they were going to need, and then they disconnected the lunar module from the command module. While Michael Collins and many people on Earth watched, first Neil Armstrong and then Edwin Aldrin stepped onto the moon leaving their boot prints “on / ashen ground.”
In this special picture book, Linda McReynolds uses rhyming verse to tell the story of the first moon landing, which took place on July 20, 1969. She captures how the astronauts felt as they looked at Earth from the moon, and readers will see how important this event was not only for Americans, but for all people.
An author’s note at the back of the book provides readers with further information about the moon landing, and Ryan O’Rouke’s artwork provides a perfect backdrop for the author’s compelling and atmospheric rhyming verse.