I have to tell you that here in Ashland, Oregon we have been having the strangest spring I have ever experienced. On April 11th I was up at the crack of dawn to go to Medford, a town just 20 minutes away from my town. I drove to the downtown area and then proceeded to collect my runner's packet for the Pear Blossom Run. Not being in the best of running shape, I had decided to do the 5K and not the 10 mile. The morning was freezing and I was quite numb as I set off with the other runners.


Later that day I sat on the side of the streets with hundreds of other people to watch the Pear Blossom Parade. It was quite a spectacle and my daughter Elise was particularly taken with the horses and the clowns. After being frozen earlier in the day I was then cooked as I watched the parade.


Since then we have had lovely warm days - and snow. And I don't mean a little snow either. We had stick-to-the ground snow for one day and several flurry filled days as well. On Saturday April 19th my husband and I walked into town to go and see a play at the Oregon Shakespeare Festival. It was blizzard like outside and we arrived at the theatre covered with snow. I have to say that the production of "Coriolanus" that we saw was superb. I read and studied the play a long time ago and read about it again before I went to the performance. The actors swept me away and by the end of the play (which is very tragical) I was feeling very moved and spell bound. Anyone who loves Shakespeare's plays should try to come to Ashland to see the performances put on by this very special theatre company.


One the work front I have been preparing for the May issue of the Through the Looking Glass Book Review by reading a varied and wonderful collection of books about "Insects and their relatives." Even though I studied entomology in university many eons ago, I found myself learning all kinds of fascinating things about insects, spiders, and other many-legged animals. One book in particular struck me. "A Place for Butterflies" not only describes several lovely butterfly species but it also highlights the rocky future that many of these special creatures are facing. Often we think of endangered Giant Pandas, threatened elephants, and the status of other rare large animals. We forget that there are many smaller creatures which are endangered too, creatures which many of us can do something to help. By planting a garden filled with the kinds of plants that butterflies like, we can make a difference. Best of all this is an activity which children can enjoy. They will see the fruits of their labors when butterflies come to the flowering plants which they so carefully planted in the spring. 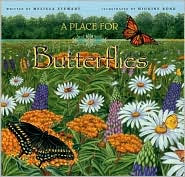 Happy Spring!
Posted by Marya Jansen-Gruber at 10:17 AM No comments: