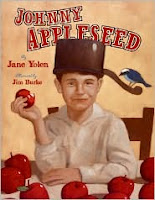 On September 26th, 1774, a little boy was born in New England who would become the stuff of legend. He was called John Chapman, but he came be known as Johnny Appleseed, the man who planted thousands of trees around the country.
I have reviewed several books about this interesting man, and one of the best is a title that I reviewed recently. Written by one of America's great children's book writers, Jane Yolen, it is a book that is both entertaining and informative. Here is my review:

Many of us have heard about Johnny Appleseed, the folk hero who, it is said, traveled around the country planting apple trees. The real story of John Chapman is even more impressive than the legends that came to be associated with his name.

After his father returned home from serving in the revolutionary war armies, John (Johnny) Chapman went to live in Longmeadow, Massachusetts, with his family. Being the son of a poor man, Johnny was not able to stay in school as long as perhaps he would of liked. Instead, he was apprenticed to a local farmer. Johnny learned how to plant and care for apple trees on the farmer’s land, and he grew to love the trees that are so useful and so beautiful.

When he was in his twenties, Johnny decided that he wanted to follow the teachings of Emanuel Swedenborg, a philosopher who believed that people should “do good and spread the doctrine of God’s goodness and bounty.” And so Johnny traveled around the countryside living simply, preaching, and selling people small apple trees that he grew from seed.

In this delightful picture book, Jane Yolen gives her readers a picture of what the real Johnny Appleseed was like. Though verse and prose she tells the story of a man who was often considered “crazy,” but who loved to travel, to share stories, and to give people apple trees. At the end of the book, Yolen also talks about the legend of Johnny Appleseed. She helps young readers to appreciate that this legend is based on the real life story of a man who did indeed do remarkable things.

Posted by Marya Jansen-Gruber at 11:29 AM