'Tis the season for award announcements, and I am happy to tell you that Bad News for Outlaws: The remarkable life of Bass Reeves, Deputy U.S. Marshal won the 2010 Coretta Scott King award. The book would make a great title for children studying the real Wild West and Black History Month. Here is my review:

Bass Reeves was born into slavery in in 1838, and he grew up on a plantation in where he took care of the animals, fetched water, and learned how to become a crack shot. Bass was such a favorite with his master, Colonel George Reeves, that his master took Bass with him into battle when the Civil War broke out. During an argument, Bass struck his master, and knowing that this was a death sentence for a slave, Bass ran away to live with Native Americans in .

When the Civil War was over and he was free, Bass settled down, got married, and he and his wife had children. Bass was happy living in but then the area “became a haven for the West’s most notorious outlaws.” Judge Isaac C. Parker was sent to the territory, and he hired two hundred deputy marshals to help bring law and order back to the land. Bass was one of these deputy marshals, and he took his job very seriously, bringing in the outlaws he was sent to catch without resorting to undue violence. He was incorruptible, determined, and “as honest as the day was long.”

In this fascinating picture book, Vaunda Micheaux Nelson beautifully tells the story of one of the West’s unsung heroes. Unlike many Wild West legends, this story is true. With gripping accounts of Bass Reeves’ exploits, the author keeps the reader engaged right to the last page.

Here is some information about the author and the illustrator: 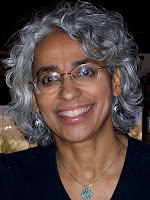 Vaunda Micheaux Nelson is the author of numerous fiction and nonfiction books for children, including Almost to Freedom, which received 2004 Coretta Scott King Illustration Honor Award. In addition to writing books, she has also been a teacher, newspaper reporter, bookseller, and school librarian. She lives in Rio Rancho, .

R. Gregory Christie is an award-winning illustrator of many picture books, including Only Passing Through: The Story of Sojourner Truth and The Palm of My Heart: Poetry by African American Children, for both of which he won Coretta Scott King Illustration Honor Award. His work has also appeared in The New Yorker and on music CD covers. He lives in .

You might also like to visit the website that Lerner Publishing created for the book. Here you will find an author's note, background information, a discussion guide, a podcast with the illustrator, and much more.

Please consider purchasing the book through this blog.

Posted by Marya Jansen-Gruber at 2:09 PM