When you go to an art gallery in a big city, it is fascinating to see how people from all over the world, who are speaking a wide variety of languages, are all able to enjoy looking at the same art. Art is truly universal, and it can bring people together, allowing them to connect despite their differences.

Today's picture book tells the story of one young bear's art adventure, and we see how his art helps him to make a new friend. 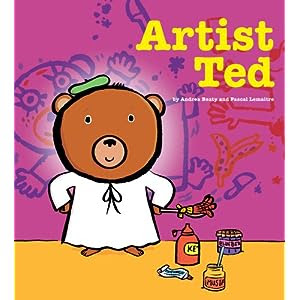 Artist Ted
Andrea Beaty
Illustrated by Pascal Lemaitre
Picture Book
For ages 5 to 7
Simon and Schuster, 2012, 978-1-4169-5374-6
One morning Ted the bear wakes up, he looks around his room, and he realizes that his room needs “an artist to spiff things up.” Ted looks all over his house for an artist, and when he can’t find one hanging out in the fridge or in the fish aquarium, he decides to become an artist himself.
Ted knows that he needs an imagination to be an artist, and thankfully he has “one of those,” but what he doesn’t have is a paintbrush. Nor does he have paint, but Ted is a clever young bear and he improvises. He makes himself a paintbrush, and he finds that jam, mustard, chocolate sauce, and ketchup can be used as paint.
Soon Ted has painted big murals on the white walls of his house. For some reason, his mother isn’t very enthusiastic about his works of art, so when Ted gets to school he paints the walls there. Principal Bigham does not seem to appreciate Ted’s art either, but Ted does not let the principal’s negative attitude bother him.
In class, Ted notices that there is a new student in the room. Ted tries to make friends with Pierre, but the little monkey refuses to smile or speak. Somehow, Ted needs to show Pierre that he is welcome and among friends.
Art is one of the few things in this life that has universal appeal. Even if two people come from very different backgrounds, they can still appreciate the same work of art. They can also communicate through art when they don’t have a common language. In this charming picture book, the author explores this idea. Her irrepressible Ted is not easily discouraged, and his passion for art not only makes him creative, but it also makes him keen to use art to reach out to his new classmate.
Posted by Marya Jansen-Gruber at 4:00 AM