When you are around someone a great deal it is easy to get used to being half of a pair. Most of the time this is a good thing, but there are times a break from the togetherness and connectedness is a good thing. In today's picture book, Amy Krouse Rosenthal explores this idea in a novel and delightful way. 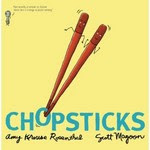 Amy Krouse Rosenthal
Illustrated by Scott Magoon
Picture Book
For ages 5 to 7
Disney Hyperion Books, 2012, 978-142310796-5
Chopsticks are a pair of friends who have been together for “forever.” They go everywhere and do everything as a pair and no one, not Spoon or Fork or Knife, can ever remember seeing them apart.
Chopsticks are very skilled when it comes to manipulating food, and they are always challenging themselves to master “fancy new culinary tricks.” This is what they were doing when one of them accidentally breaks a tip. The injured Chopstick is whisked away to the doctor by Whisk. The doctor bandages up the damaged tip, and Chopstick is told that he needs to rest until the break sets.
For days, the uninjured chopstick stays by his companion’s side until his dear friend tells him to “venture off on your own a bit.” The uninjured Chopstick cannot imagine being alone, but he does what his friend asks him to do, and goes off to explore on his own. He has no idea then that leaving his friend for a while is going to change both their lives.
With deliciously amusing illustrations and clever examples of word play, Amy Krouse Rosenthal tells a story that is heartwarming and empowering. Children will see how even the best of friends can benefit from being apart for a while, and why it is important to learn how to stand on your own two feet, or on your one chopstick!
Posted by Marya Jansen-Gruber at 4:00 AM