In 2010, in her book Mirror Mirror, Marilyn Singer presented the world with a new poetry form that she created. When I read the reverso poems in that first book I was gobsmacked. What an amazing idea she had come up with. The poems in the book can be read from top to bottom and then from bottom to top. They explore an idea or a story in two different ways. Today's poetry title is her new collection of reverso poems and I can promise you that they are quite extraordinary. 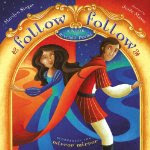 Follow Follow: A book of reverso Poems
Marilyn Singer
Illustrated by Josee Masse
Poetry Picture Book
For ages 5 to 8
Penguin, 2013, 978-0-8037-3769-3
Most of us know that every story has got at least two sides. At least two! We know that it is wise to make sure that we know both sides to a story before we decide which side we will support. Do fairy tales also have two sides that we should be aware of?
They most certainly do, and in this delightful book Marilyn Singer looks at some very popular fairy tales and she give us two points of view. She uses a very interesting poetical device to do this. For each fairy tale she presents one side of the story in a poem, and then she reverses the text in the poem to give another point of view.  Thus in the story of the little mermaid we begin with the idea that she should “For love / give up your voice. / Don’t / think twice.” In the reverso poem we end with “Think twice! / Don’t / give up your voice / for love.”
The poem Follow Follow is about the Pied Piper of Hamelin who led rats away from the town of Hamelin and who, when he was not paid for his work, had his revenge. The author’s account begins when we hear from a man who says “there will be / no pay,” for the piper who should “go away.” In the reverso poem we hear from the piper who, having been betrayed, announces that he will make sure that the children of Hamelin “shall never return.”
In some of the pairs of poems the narrator is the same, while in others there are two narrators. Reverso poems were invented by Marilyn Singer and they show to perfection how a skilled poet can play with words to create something interesting and unique. Each of the twelve pairs of fairy tale poems in this book offers readers something to think about and enjoy.
Posted by Marya Jansen-Gruber at 4:00 AM