Poetry Friday with a review of Everything is a poem: The best of J. Patrick Lewis

J. Patrick Lewis is one of my favorite poets. Somehow he is able to create a wide variety of voices in his poems so that each one has a unique tone and flavor. How he is able to do this to such great effect confounds me. Today's review title contains a diverse selection of his poems, and I think anyone who likes poetry will enjoy exploring this book. 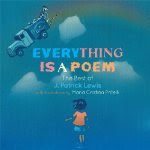 Everything is a poem: The best of J. Patrick Lewis
J. Patrick Lewis
Illustrated by Maria Christina Pritelli
Poetry Picture Book
For ages 7 and up
Creative Editions, 2014, 978-1-56846-240-0
J. Patrick Lewis discovered what he calls “word magic” relatively late. He had been teaching college economics for thirty years before he realized that he was in the wrong line of work and he made a radical change, trading in figures for words. After years of struggle, J. Patrick Lewis finally got an acceptance and since then he has written eighty-five picture books and hundreds of poems.
J. Patrick Lewis wanted to “write poems in a hundred voices” and to “explore everything under and over the sun in as many different ways as it’s possible to write poetry.” He has done both of these things many times over, and this collection of his poetry will give readers a feeling for his skill and his passion for poetry. The collection certainly demonstrates that he has the ability to “help unlock imaginations,” which is another of his goals.
The poems are divided up into eight categories. These include poems about animals, people, reading, Mother Nature, and places. They come in many forms and do indeed have many different voice and tones. Some will make the reader laugh out loud, while others are more contemplative and will give the reader food for thought. Some tell fictional stories, while others serve as a tribute to a real person who contributed to the world in some way.
For example in Baby Contralto we read about Marian Anderson who “brushed / Her voice / Across the air / In colors / Not seen / Anywhere.”  We can also read about Miles Davies, Roger Bannister (who broke the four-minute mile), Jesse Owens, and Rosa Parks.
In the Mother Nature section we can read about a redwood that is six thousand years old. It “waved its arms about the sky / And sang a sea breeze lullaby,” until in 1977, the great tree “bid farewell,” and fell to the forest floor. We also meet a “her-i-cane” called Lorelie, who “twisted around the ocean” but who “never grew / into a proper her-i-cane.”
Though these poems were written for children, readers of all ages will enjoy dipping into this collection. There is something on these pages for everyone. It would make a perfect gift for anyone who loves the magic that lies in words.