There are times when having a younger sibling is quite simply, a pain. Often little brothers and sisters have a limited understanding of what personal space is. They cannot fathom why their big brother or sister doesn't want them around all the time. Then there are those times when a little brother or sister does something that is kind and cute, and somehow, at that moment, the annoying times seem smaller and less important.

Today's poetry title explores the relationship between two sisters and we see, to great effect, the emotional ups and downs that they experience from day to day. 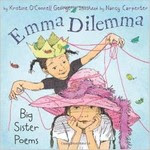 Illustrated by Nancy Carpenter
Poetry Picture Book
For ages 6 to 8
Clarion, 2011, 978-0618428427
Sometimes having a little sister is a frustrating because your little sister seems to take over your life. People expect so much of you as well, as if what you want doesn’t matter at all. Jessica is rather tired of people saying “I’ll bet you’re / a very good big sister,” which means that they hope she is a good big sister to Emma. Why doesn’t anyone ask Emma if she is being a good little sister. No one ever does and it really isn’t fair.
The truth is that sometimes Emma is a really bad little sister. There was the time when she made a scene at Jessica’s soccer game and embarrassed Jessica so much that she pretended that she had no idea who Emma was. On the first day of school in fourth grade Jessica is late because Emma put rocks in one of Jessica’s shoes. When she gets home from school Jessica finds out that Emma has created a “Big spidey web” in Jessica’s room using yarn.
Of course there are those special times that only they share, and though she might not come out and say so, Jessica does value those moments that she has with her little sister. When Jessica reads her old picture books to Emma she feels as if she is “visiting / old friends.” Jessica knows that Emma loves her in part because Jessica is the only person who can remember the names of all of Emma’s rocks. When Jessica is feeling bad because she did poorly in a spelling test, Emma snuggles up to her and pats her big sister’s arm. She even gives Jessica one of her favorite stuffed animals to hold for a whole hour.
So, there are pluses and minuses to being a big sister. Sometimes though, the minuses outweigh the pluses, and sometimes this means that things go horribly wrong.
Using a series of wonderfully expressive poems, the author of this book captures the up and down nature of a relationship between two sisters. There are times full of friction and discontent, happy times, funny times, loving times, and really really bad times. Readers will find it easy to relate to Jessica, and they will understand how having a little sister can be both exasperating and enriching.