Poetry Friday with a review of Double Happiness 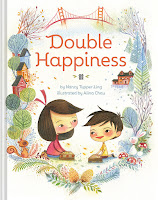 Moving to a new home can be hard for children. They often have to leave friends and family members behind and it can be scary not knowing what your new life is going to be like.

In this delightful poetry title the author uses a series of poems to tell the story of two children who are moving away from their home in San Francisco and going to a new house many miles away in a different state.

Double Happiness
Nancy Tupper Ling
Illustrated by Alina Chau
Poetry Picture Book
For ages 5 to 7
Chronicle, 2015, 978-1-4521-2918-1
Gracie and her brother Jake are leaving their home in San Francisco and they are going to live in a new place far away from family members, and far from their “city house / by the trolley tracks.” Gracie is not happy about this change but her brother is excited about the prospect of having a new room with all kinds of ‘cool’ things in it.
Before they leave, the children’s grandmother, Nai Nai, gives each of the children a box in which to put four items, treasures that will lead them “from this home / to your new.” The first item to go into Gracie’s box is her Nai Nai’s panda toy, which Nai Nai gives her. On the bus to the airport Jake finds a lucky penny, which goes into his box. As Gracie gets off the bus at the airport a eucalyptus leaf drifts down in front of her. The leaf is “the perfect treasure to remind me of home” so it is placed carefully into her box.
As the journey to their new home unfolds, we join Gracie and Jake in their adventures as they visit the plane’s cockpit, try not to fall asleep, and then see their new home “from the sky.”  With their happiness boxes by their sides, the children experience change that is both painful and exciting.
In this unique book the journey two children take is told in a series of poems. Some of the poems are from Gracie’s point of view, and some are from her exuberant brother’s. Some of them are told using both ‘voices,’ which beautifully capture how different the children are.
Throughout the book the poems are accompanied by beautiful and emotive illustrations that capture the connection that the children have with their former home, and that also explore the hopes and fears that they have about their new one.