Poetry Friday with a review of Voice of Freedom Fannie Lou Hamer: Spirit of the Civil Rights Movement

It isn't often that I come across biographies that are written using poems. I am sure such books present the writer with a unique set of challenges. The author of today's poetry title rose to the challenge beautifully and created a book that is powerful and memorable. 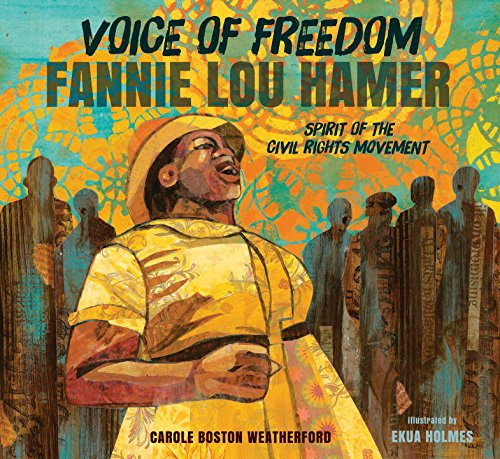 Carole Boston Weatherford
Illustrated by Ekua Holmes
Poetry Picture Book
For ages 6 to 8
Candlewick Press, 2015, 978-0-7636-6531-9
Fannie was born in 1917, the daughter of sharecroppers who lived and labored in Sunflower Country in Mississippi. Though the sharecroppers were technically free, their lives were terribly hard, for “Sharecropping was just slavery by a gentler name.” Fannie was only six when she started working in the cotton fields with her family members. Though they picked fifteen tons of cotton each season, they could never “get ahead” because “the scale was always tipped / in the owner’s favor.”
Even as a young child, Fannie could see that there was no equality in her world. Whites had food, clothes and everything they needed, while blacks worked hard every day and still went hungry. Fannie’s mother taught her daughter that even if they had less than the whites, they were not lesser people. She wanted her youngest child to “respect yourself as a Black child.”
Worn out by hard work, Fannie’s father died before she twenty-two and many of her brothers and sisters moved north where they hoped to find better paying work. Fannie would have joined them but her mother needed to be taken care of, so she stayed in the land of Jim Crow. Fannie got married and she and her husband did their best to get by, picking cotton in the fields, and selling homemade bootleg liquor.
In 1962 one of Fannie’s friends told her that some young men were coming to their local church to talk to the congregation about voter registration. Not a single person in the congregation had ever cast a ballot but that did not stop eighteen of them, including Fannie, from volunteering to go to sign up and register. Fannie never imagined that the simple act of going to register to vote would have a huge impact on her life, but it did. The white establishment would not tolerate such behavior, and blacks who tried to sign up were punished over and over again. Fannie lost her job and her home; she was shot at; she had to move from place to place, and then, finally, she decided that enough was enough. Fannie was going to speak out and do her part to bring about change.


In this memorable picture book biography, powerful poems bring Fannie Lou Hamer’s story to life. We see how she struggled, and how she stood up for what she believed in, even when it was dangerous to do so. The poems contain direct quotes from Fannie Lou Hamer, and at the back of the book an author’s note contains more information about this incredible woman’s life.
Posted by Marya Jansen-Gruber at 9:19 AM