Poetry Friday with a review of Winter Eyes.

In just a few days it will be the winter solstice, the longest day of the year. I love celebrating the solstice as I feel the day connects me to my ancestors, for whom the solstice was a time of reflection and celebration. It was also the beginning of a season that was often hard and taxing.

Today I bring you a review of a winter poems book that I thoroughly enjoyed, and I hope you will enjoy the book too. 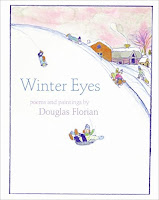 Poetry Collection
Ages 5 to 8
HarperCollins, 1999, 0-688-16458-7
There are so many wonderful things to look forward to in the winter time. There are frozen lakes to skate on, holidays to celebrate, hot cocoa to sip, and nights to spend sitting in front of the fireplace. There are also certain things about winter which we are less keen on like having frozen toes, getting colds, shoveling snow for hours, and having less time to play outdoors because of the shorter days.
In this collection of twenty-eight poems the author perfectly captures the atmosphere, the joys, the woes, and the celebrations of this season. He describes time spent toasting toes in front of a fire; he ‘paints’ pictures in words of animal tracks in the snow and icicles hanging from the eves. He has created poems that rhyme and poems that do not. He has also created poems which tell a story not only through the words themselves but also by the way those words are arranged on the page. The poems are funny, poignant, descriptive, and expressive and together they present the reader with a charming portrait of wintertime.

Posted by Marya Jansen-Gruber at 10:38 AM