Poetry Friday with a review of Echo Echo: Reverso poems about Greek myths 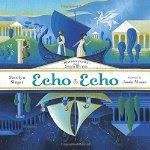 When I was growing up on the island of Cyprus in the Mediterranean, I read many of the Greek myths. Some of the places mentioned in the myths I was even lucky enough to see in Greece, including Mount Olympus, where the Gods were said to live. In today's book readers will encounter some of these myths but in poetry form. And the poems they will encounter can be read in two ways, which makes this bookish poetry experience quite unique. Happy Poetry Month!

Echo Echo: Reverso poems about Greek myths
Marilyn Singer
Illustrated by Josee Masse
Poetry Picture Book
For ages 5 to 8
Penguin, 2016, 978-0-8037-3992-5
Often we like to think that there is only one side to a story, the side that we believe in. The truth of the matter is that usually there are at least two sides to a story that often contradict each other, two perspectives as seen through the eyes of two very different people who are on opposite sides of the story.
In this very unique book of poetry the author takes us into the world of Greek mythology so that we can explore the two sides of some of Greece’s most famous stories. The myths were created so that people could explain the world they lived in, a world that was often full of chaos and unknowns, which is perhaps why so many people are drawn to them.
Chaos is certainly at the heart of the story about Pandora and her famous box. The story goes that Zeus gave Pandora a box telling her not to open it. Being human and curious, and prone to doing things that she is told not to do, Pandora opened the box and let loose “all the evils of the world.”
This is the first myth that is explored in this book. We are presented with two poems, placed side by side, and hear the story from two points of view. In one Pandora is blamed for what happened, and in the other we are see that Pandora could well have been Zeus’ pawn, that he planned the whole terrible businesses. What makes things interesting is that the second poem is the reverse of the first, with the last line of the first poem serving as the first line of the second.
In the poem King Midas and his Daughter, the story of the king whose greed led to his daughter being turned into a gold statue is told first from the point of view of the daughter and then from the point of view of the king. The daughter’s voice tells us how she was “so needy / so greedy” for a loving touch from her unaffectionate father. The father’s narrative tells us that he was “ so greedy / so needy” to have the magic touch that turned things into gold, and he paid dearly for the gift he was given.
The other myths explored in the book include the story of Arachne and Athens, the tragic tale of Narcissus and Echo, and the ill-fated story of Icarus and Daedalus.
The poems in this book show great creativity, and they certainly bring old myths to life, but they do more than that. This book shows, to great effect, how problems might arise when two people see the same thing from only one point of view.