Picture Book Monday with a review of Not Quite Narwhal

One of the things that many children struggle with is finding out where they belong in the complex society that often dominates their social life. When I was young I certainly had a hard time figuring out where I fit in. The story in this beautiful picture book describes the journey that a young narwhal makes. Through him we get to see that sometimes the best way to solve the "where do I belong" problem is to follow your heart. 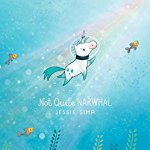 Not Quite Narwhal
Jessie Sima
For ages 5 to 7
Picture Book
Simon and Schuster, 2017, 978-1-4814-6909-8
Kelp was born in the ocean and it soon became clear that he wasn’t quite like the other narwhals. His horn was short, he did not like eating squid, and his swimming skills were not of the best. This was not really surprising when you consider that he did not have fins and a big flat tail suitable for swimming. Instead, Kelp had a flowing tail and legs, which was rather odd. Thankfully, none of Kelp’s narwhal friends minded that he different, and so “Kelp decided he wouldn’t either.”
One day Kelp was swept away by a current and was carried to the surface. When we poked his head out of the water he saw that he was very close to the land, and standing on a headland, illuminated by the moon, was an animal that looked just like him.
Kelp overcame his fear of the land, figured out how to walk on it, and then began to explore, hoping to find the creature that he had seen on the headland. Eventually, after walking through a forest, he found the creature and many others like it. Kelp thought that the animals with manes, tails, and legs were land narwhals, but it turned out that they were unicorns. And he was one too!
Kelp was delighted to get to know the unicorns and to find out things about himself that he did not know, but there was a problem. He missed his home in the sea and the friends that he had there.
In this incredibly sweet and heartwarming picture book story, we watch as a little animal struggles to figure out where he belongs. Many people face this very same problem, and seeing how Kelp finds a solution is uplifting. This story is a celebration of acceptance and inclusivity.