Picture Book Monday with a review of The Darkest Dark

Facing your fears is never easy to do. Imagine what it would be like to be a chef who is afraid of knives, or a doctor who has a fear of needles. In this clever picture book biography you will meet a little boy who loves to pretend that he is an astronaut and who is fascinated by space. Perhaps he even dreams of going up into space one day. There is a problem though; the little boy is afraid of the dark. 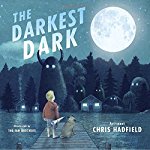 The Darkest Dark
Chris Hadfield
Illustrated by the Fan Brothers
Picture Book
For ages 5 to 7
Tundra Books, 2017, 978-1-101-91862-3
Chris loves pretending that he is an astronaut. In fact, he is often so busy flying around in his cardboard rocket, saving the planet from aliens or visiting Mars, that he has a hard time making time for baths and bedtime. After all “An astronaut’s work is never done,” and they don’t like wasting time on sleep. The problem is that Chris’ parents do like to sleep and so they are not best pleased when Chris climbs into bed with them. Nor are they too thrilled when he tells them that the darkness in his room is the kind that “attracts the worst sorts of aliens.”
Some parents might give in at this point and let their son sleep with them, but Chris’ parents are putting their feet down. Chris will get over his fear of the dark and he will sleep in his own bed. They check to make sure that his room is “100 percent alien free,” they turn on his night light, and they even give him a bell to ring if he gets nervous. Then they take the bell away.
Chris is then told that he needs to stop his fooling around because if he doesn’t he will not be able to attend the special event that is going to take place at their neighbor’s house the next day. Being able to go next door the next day is so important to Chris that he stays in his bed, and after a long time he falls asleep. What Chris does not know yet is that his experiences the next day will change how he feels about the dark, and it will influence the choices that he makes in his life in the future.
Written by the first Canadian astronaut to walk in space, this wonderful picture book shows young readers how a single event can change ones perspective and even change one’s life. In Chris’ case what he saw that on that special night at his neighbor’s house planted the seed of a dream in his heart, and it was a dream that he never gave up on. He worked hard until the day came when he finally got his chance to go into space.
At the back of the book young readers will find further information about Chris Hadfield. They can also read a message from Chris, and see photos of him when he was a little boy and when he was an adult working in space at the International Space Station.