Picture Book Monday with a review of Elmore

Soon after I started reviewing books I read the Poppy and Rye series written by Avi. In some of the books we meet Ereth, a foulmouthed, grumpy, and incredibly lovable porcupine. I adored Ereth and think of him every time I see a picture or a video of a porcupine. I was therefore naturally drawn to today's picture book. In the story we meet Elmore, a porcupine who has a very big and troubling problem. 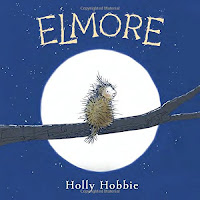 Picture Book
For ages 5 to 7
Random House, 2018, 978-1-5247-1863-3
Elmore is a porcupine and he lives in a big, old maple tree. He lives in the tree by himself, which is what porcupines do. One would think that he would be used to the solitary life by now, but the truth of the matter is that Elmore cannot help feeling a little lonely.
One day Elmore decides that he will try to get some friends. He puts up a sign that reads: “Friends Wanted.” He soon discovers that the other animals in the forest are reluctant to become his friends because he is just “too prickly.” If they come to close they are likely to get “needled, nettled, prickled,” which, not surprisingly, they are not too keen on.
Elmore’s quills are proving to be a problem but they are there for a reason. They protect him, and his uncle reminds him that Elmore “wouldn’t be a porcupine without quills.” His quills are beautiful and he should value them.
Elmore’s uncle’s kind words warm him, and they also give him an idea.
So many people find it hard to fit in because they are different in some way. How do you get people to accept you when they won’t even give you a chance? What do you do when they write you off from the get go? This wonderful book explores how one determined porcupine finds a way to show the animals in his world what he is like on the inside. After all, that is the part of an animal, or a person, that really matters. Being prickly on the outside does not mean you are prickly all the way through.
Readers who enjoyed the Puddle and Toot books are going to love this beautiful new title from Holly Hobbie.

Posted by Marya Jansen-Gruber at 10:57 AM