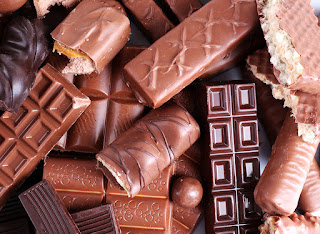 This year a lot of people gave us chocolate as gifts. Sampling these sweet treats gives me a great deal of enjoyment, and I happily confess that I am having chocolate at least twice a day. Today is National Chocolate Candy Day here in the United States, so it seems fitting that we should take a look at this delicious confection. I should note here that the Americans use the word candy the way other English speakers use the word sweet. I have reviewed several books that feature chocolate  over the years. Please take a look at them.
The word “chocolate” comes from the word “xocoatl” or “chocolatl.” Mayan “school” means hot or bitter, and the Aztec “atl” means water. Chocolate comes from the seed of the tropical Theobroma cacao tree. Cacao has been cultivated for at least three millennia and grows in Mexico, Central America, and Northern South America. The earliest known documentation of using cacao seeds is from around 1100 BC. Long before it was ever made into a sweet confection, the seeds were ground into a beverage. In the ruling classes the beverage was used for medical purposes.
In 1828, a Dutch inventor and chemist, Coenraad Van Houten, developed a way to produce chocolate in a solid form. His hydraulic press made it possible to remove the cocoa butter from the cacao. His invention lead to the production of a powder and drinking hot chocolate was very popular. This development paved the way for the first chocolate confections.
A few Chocolate Facts
*Whitman’s produced their first box of chocolate in 1842.
*In 1847, British chocolate company J.S. Fry & Sons combined cocoa butter, cocoa powder, and sugar-producing the first edible chocolate bar.
*The invention of the conching machine by Rodolphe Lindt in 1879 ushered in the mass production of the creamy treat.
*The first chocolate Easter egg was made sometime in the early 19th century. In 1875 John Cadbury introduced his first chocolate egg.
*When Allied troops stormed the beach of Normandy on D-Day, part of emergency rations and in soldiers’ packs included the D ration bar designed by Hershey Chocolate company for the U.S. Army.
Posted by Marya Jansen-Gruber at 12:04 PM