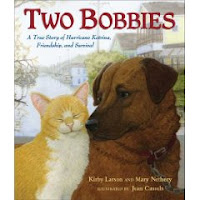 For those of you who are animals lovers I have the prefect book for you. It is a true story about a cat and a dog who form a meaningful frienship and who help one another during a time of great hardship.


Join me today for an interview with Kirby Larson, one of the authors of the book:

1. How did you take the step from hearing about the two Bobbies to writing about them?
Mary and I had been looking for about six months for a story to write about unlikely animal friends. Serendipity struck when she turned on the TV one night, about six months after Hurricane Katrina, and saw a snippet about the Bobbies on Anderson Cooper 360.

2. Did you go to New Orleans to do research? If not how did you capture the atmosphere of the city in the months following the Katrina disaster?
I had gone to the Gulf Coast twice – once to Pearlington, Mississippi and once to Houma, Louisiana – to help with Katrina clean-up and recovery efforts. I remember the profound silence in Pearlington, six months after the hurricane – not a bird to be heard anywhere. So we had that experience to draw on as well as input from the book’s illustrator, Jean Cassels, who lives in New Orleans and was evacuated during Katrina.

3. Did you interview some of the people who were at the shelter when the two Bobbies arrived?
Our top priority was to be as accurate as humanly possible, which required much research and many interviews. We interviewed all the key volunteers at the Best Friends Animal Society temporary shelter in New Orleans, including: Barbara Williamson, who kept the two Bobbies in her motor home; Whitney Jones, the intake volunteer and Shelley Thayer, one of the pet detectives. We even spoke with the vet who cared for the Bobbies after they were adopted.

We are so appreciative of the work done by the volunteers of Best Friends Animal Society that Mary and I are donating 10% of our authors’ royalities to that organization.

4. Have you met the two Bobbies?
Though Mary and I didn’t get to meet them at the same time, we have both met them. They were adopted by a wonderfully generous woman, Melinda Golis, who has a ranchful of rescue animals in southern Oregon. Melinda also operates a therapeutic riding program there – Bobbie dog loves to go along on trail rides! Sadly, Bob Cat died a few weeks before the book came out but we are all comforted by the fact that he was treated like royalty in his last years. He was quite the party-cat and followed you around the house, determined not to miss a word of conversation.

5. Is it hard to write a book with someone else, and do you feel that the experience has brought you and Mary Nethery closer?
Writing a book is hard, whether you do it alone or with someone! Mary and I talked quite a bit about the process of working together, before we even put one word to paper. That helped. Honestly, it was a terrific experience. I’m not sure it brought us any closer because we are the dearest of friends but we loved
collaborating so much we are now at work on a second book together!

6. You clearly have a fondness for animals. Do you have pets of your own?
We’ve had several parakeets (Merlin and Tigger), a mouse (Gulliver) and a cat named Jake. Our household now has only one pet, our 18-year-old cat, Mimi.

7. Including Two Bobbies your other books are picture books, except for Hattie Big Sky which is a novel. Was it hard to write a longer book after your picture book experiences?
I do have two chapter books (and two ghost-written chapter books) published so I do have some longer works out there. And, Hattie Big Sky is simply my only published novel, not the only one I’ve written. You’d find quite a hefty stack of practice novels in my files! There are challenges to writing period, no matter if the text is a picture book or a novel. I worked 10 years on my picture book, The Magic Kerchief, which has about 1400 words, and only 4 years on HBS!

8. Where did you get the idea for “Hattie Big Sky” and has its success had a big impact on your life?
I got the idea for Hattie Big Sky when I learned that my great-grandmother had homesteaded by herself in eastern Montana as a young woman. I didn’t set out to write a novel but to learn more about her experiences. The more research I did, however, the more I was convinced there was a story to tell.

Hattie Big Sky has received such lovely attention, including the Newbery Honor, Montana Book Award, and more than a dozen nominations for state Young Readers’ Choice awards. That is success beyond what I ever allowed myself to dream of. It’s lovely. . .and it’s hard. Writing the next novel has proved a daunting task (though, thanks to writing friends, I’m snapping out of it) and I do get uncomfortable when people fuss over me and make a big deal of the awards. I’m a pretty unremarkable person who got very, very lucky.

10. Do you read a lot of children’s literature?
Of course! It’s such wonderful, rich and engaging literature. I feel sorry for people who don’t!

11. What was your favorite book when you were a child?
I read too much to remember a favorite book from my childhood. My kids and I, however, roared every time we read How Tom Beat Captain Najork and His Hired Sportsmen (written by Russell Hoban, illustrated by Quentin Blake) and Hoban’s Ming Lo Moves the Mountain was the book that inspired me, as an adult, to become a children’s book writer.


Jean Cassels' Website
Posted by Marya Jansen-Gruber at 9:00 AM