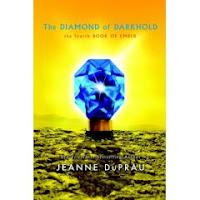 For this second day of the Jeanne Du Prau blog book tour I have got an interview for you to look at.

1. What, if any, was the inspiration for the idea of a city underground?
I grew up in the 1950s, when many people were worried that there might be a nuclear war. Some people were even building bomb shelters in their back yards. I used to read magazine articles with instructions about how to do this. All of it made a huge impression on me, and there's no doubt that it influenced my idea for Ember, which is a place built to save the human race from a terrible threat.

2. The Prophet of Yonwood takes a big step back in time from The City of Ember. Did you find it hard to make this step in the writing process or was the transition an easy one to make?
When the idea for The Prophet of Yonwood first came to me, I thought it was going to be a separate book, not connected to the Ember series. But as I started writing it, I soon realized that it was connected after all. It was a story about fear and unreasoning belief and what can happen when people see their own side as absolutely right and all others as absolutely wrong. It was a story about the origins of conflict, in other words--the kind of conflict that can lead to a disastrous war, and it was that sort of war that led to the building of Ember.

3. In the Diamond of Darkhold the diamonds that Lina and Doon find end up being crucial for the people of Sparks. Where did you get the idea for the diamonds, and do you feel that there is an environmental message here regarding solar power?
I have been interested in solar power for a long time. I'm hoping we will find a way--soon!--to use it efficiently for all our energy needs. Twenty years ago, I built a small house powered entirely by photovoltaic panels. It was a wonderful feeling to know that my lights, my refrigerator, and my computer were all being run by the sun! So of course I'd like others to share my enthusiasm.

4. At the end of The diamond of Darkhold you mention that a space ship has come from an alien world to visit Earth. This sounds intriguing and I for one would love to know what happens next. Do you plan on writing about this story in a future book?
I don't think so. I too would love to know what might happen in an encounter between human beings and people from another planet. But it isn't easy to create a convincing alien in a story. I've rarely seen it done. What I'd really like is to live long enough to be here in this world when we make contact with intelligent beings elsewhere in the universe. That would be an unimaginable thrill.

6. Do you plan out your books in advance or do you just let the story unfold as you go?
A little of both. I make a rough plan and write according to the plan until I see that it doesn't work any more, that the story has taken a new direction. Then I make another rough plan and follow that one for a while until it doesn't work anymore, either. And so on. It's a difficult and rather messy process, but I'm afraid if I outlined every step of the way and wrote exactly to the outline, my books would be less likely to come alive. And the truth is, I'm no good at outlining anyway.

7. What was your favorite book when you were twelve or so years old?
This is always a question that gives me trouble. I've never had one favorite book, not at any age. I read so much and love so many books that I can never pick just one. At twelve I was probably reading books by Agatha Christie, Charlotte Bronte, Ray Bradbury, Edgar Allen Poe, Jack London...I could go on and on.

8. Do you have a consistent writing plan that you stick to every day or are your days more fluid?
I schedule my time loosely rather than rigidly. My best working time is in the morning. I don't usually write for more than two or three hours a day, especially when I'm working on a first draft. That's the hardest kind of writing for me. When I'm revising, sometimes I work more hours. The rest of the day gets filled up with answering mail, reading, and doing all the things it takes to keep my life running more or less smoothly.

9. You must be excited about the City of Ember film that is coming out. Did you participate in the film making process at all?
Yes, the movie is exciting--I never dreamed it would happen! I haven't had a lot to do with the process, though. I don't think most authors do, unless they happen to be very, very famous. I read the filmscript and commented on it, and I have met the director and seen a few scenes from the movie. I've also had e-mail from a few people who worked as extras on the film, so I've gotten little glimpses of what that was like. But the finished movie will be almost as much of a surprise to me as to everyone else. I'm hoping it will be fabulous!

10. Did you ever think that your books would be as successful as they are? How has their success changed your life?
I did not expect this success. I'd always been a writer and had had several books of non-fiction published before The City of Ember. But Ember was my first novel, it was very hard to write, and I didn't know how it would be received at all. I had no idea that I'd be writing sequels to it, and certainly no inkling that it would be made into a movie. Because of all this, my life has indeed changed. For one thing, I've done more public speaking in the last five years than in all the rest of my life put together! I've connected with readers of all ages, all over the world. And I now get to spend my time in the place I like best--my office at home--doing the work that's more rewarding to me than anything else.

Please visit the other blogs that are participating in this tour. They are:

Thanks! What a great interview! I'm learning something new at each interview.