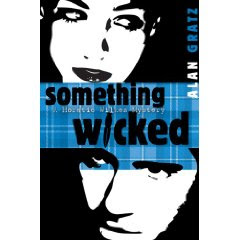 This month I have had a splendid time reading Alan Gratz's books. He has found a very compelling way to retell two of Shakespeare's stories. Using a punchy and contemporary style of writing Alan has his teenage hero solve two murders, that of Duncan in Macbeth in Something Wicked, and that of the King in Hamlet in Something Rotten.
For the next three days I will be highlighting Alan's newest book, Something Wicked. Here is my review of the book:
Something Wicked
Alan Gratz
Fiction (Series)
Ages 14 and up
Penguin, 2008, 978-0-8037-3666-5
Horatio Wilkes is going to a Scottish Highland Games on Mount Birman with his friends Mac and Banks. Both Mac and Banks are pretty serious about the games, donning kilts and participating in events at the games. Mac is pretty firmly under his girlfriend’s thumb and he does almost everything she asks of him. So when Beth announces that she wants to go to Madame Hecate’s to have her fortune told, Mac readily agrees – much to Horatio’s disgust.
Madame Hecate tells Mac that he will become “king of the mountain.” Mac is thrilled, believing everything that the fortune teller tells him. He is not best pleased therefore when he hears that Banks – his cousin – will not become king of the mountain, instead his will “own” it.
Mac’s father has long wanted to own the mountain so that he can turn it into a money making resort, but the man who owns the land, Duncan MacRae – who is Mac’s maternal grandfather - has always refused to sell it. That very evening Horatio finds Duncan MacRae brutally murdered. Evidence at the scene of the crime suggests that Duncan’s son Malcolm was responsible but Horatio is not convinced. Why would mild mannered Malcolm do such a terrible thing? It just doesn’t make sense. Furthermore there are other people around who had a much bigger motive than Malcolm. Mac’s father, Beth’s father, and Mac himself would all benefit if Duncan MacRae died.
In this second Horatio Wilkes mystery, readers will be taken into the American Scottish clans community, a community that has its own traditions, rules, and culture. Readers who are familiar with Shakespeare will quickly realize that this story is based on the tale of Macbeth, the ambitious Scot who could not let go of a dangerous dream. Alan Gratz’s gritty story shows how a simple ambition can become a corrupted passion. His characters are incredibly lifelike, and true to the feelings and thoughts that teenagers experience.
In his first book about Horatio Wilkes, Something Rotten, Alan Gratz gives a unique interpretation of Shakespeare’s Hamlet, which is also set in modern day America.
You can read my review of Something Rotten on the Through the Looking Glass Book Review website and you can read the whole book online on Alan Gratz's website - for free!
Tomorrow look for an interview with Alan right here.
Please visit the other blogs that are participating in this tour:
the 160acrewoods, A Christian Worldview of Fiction, All About Children’s Books, Becky’s Book Reviews, Book Review Maniac, Cafe of Dreams, Dolce Bellezza, Hyperbole, KidzBookBuzz.com, Looking Glass Reviews, Maggie Reads, Never Jam Today, Reading is My Superpower
Posted by Marya Jansen-Gruber at 6:44 AM