The National Book Award Finalists are announced and Samantha retires 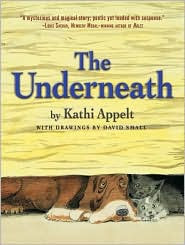 This Wednesday the National Book Award Finalists were announced. The books are:

Chains by Laurie Halse Anderson
The Underneath by Kathi Appelt
What I Saw and how I lied by Judy Blundell
The Disreputable History of Frankie Landau-Banks By E. Lockhart
The Spectacular Now by Tom Tharp.
I have, alas, only read and reviewed one of these titles, The Underneath, which I thought was quite remarkable. If you have read any of these books please let me know what you thought of them. The winner will be announced on November 19 at the National Book Awards in New York City. For more information about the National Book Awards please visit the National Book Foundation website.

Another piece of news that I would like to share with you is that American Girl's Samantha is officially retiring. Her books will still be available but that doll that has charmed doll lovers of all ages since 1986 will no longer be for sale in the American Girl stores and on the American Girl website. American Girl has put a "Share your Samantha Memories" page on their website for everyone who has enjoyed having Samantha in their lives.
“As one of American Girl’s most beloved characters, Samantha has been a friend and role model for millions of girls since her debut in 1986,” says Ellen L. Brothers, president of American Girl. “Moving Samantha to the American Girl Archives allows us to preserve her honored place in American Girl’s history and make it possible for us to introduce new characters and product offerings for our customers to enjoy.”
"Samantha, a kindhearted girl of privilege living with her wealthy grandmother in 1904, has captured girls’ imaginations with her compelling story of compassion and friendship in turn-of-the-century America. Although Samantha will be moved to the American Girl Archives, she retains her place within American Girl’s family of historical characters—nine-year-old heroines that give girls today a glimpse of what life was like growing up during important times in America’s past."
Posted by Marya Jansen-Gruber at 7:34 AM