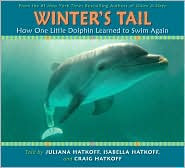 Last week I read and reviewed a delightful book about a baby dolphin who has managed to overcome a severe physical handicap, the loss of her tail. The book is called Winter's Tail: How one little dolphin learned to swim again. This true story is not only inspirational, but it also shows young readers that even the worst of tragedies can have a happy ending.

Here is my review:
Winter’s Tail: How one little dolphin learned to swim again
Juliana Hatkoff, Isabella Hatkoff, and Craig Hatkoff
Nonfiction picture book
Ages 6 to 9
Scholastic, 2009, 0545123356
One winter morning a baby dolphin got tangled in a crab trap. The ropes of the trap were wrapped around the baby dolphin’s tail and the tail was severely injured. A local fisherman freed the baby from the ropes, and then he called for help when it was clear that she was not doing well at all.
A few hours later, a rescue team arrived. The baby, who was named Winter, was taken to the Clearwater Marine Aquarium in . There she was fed with a milk mixture and her wounds were tended to. Unfortunately, Winter’s tail had been so badly damaged that it fell off. All Winter had to swim with was a stump. She did manage to learn how to swim with her stump, but she had to move her body from side to side like a fish, instead of up and down like a dolphin, and this movement started to affect her spine.
People all over th
e country heard about Winter and her accident, and the one person came forward with a solution for Winter’s problem.
Animal lovers of all ages will greatly enjoy this inspiring and moving story about a courageous dolphin who, with the help of human technology, has been able to overcome a severe physical handicap. Filled with wonderful photos, this is a story that is uplifting and full of hope.
The book's publisher, Scholastic, is offering one of my reader's a wonderful giveaway. Comment on this post and you will be entered in a drawing for the prize. Here is the information:
Winter’s Tail CHILDREN’S BOOK GIVEAWAY 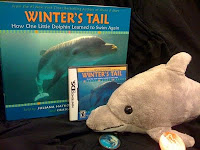 A Winter’s Tail prize pack!
The Winter’s Tail book promotion is open to participants with a mailing address only (international readers can enter if they have a friend in the States who can accept their prizes by mail!)
Here are some links that you might like to explore:
The official Winter's Tail website
The Winter's Tail trailer on YouTube
Meet the Authors
Discussion Guide / Lesson Plan
Posted by Marya Jansen-Gruber at 3:01 AM

Thank you. I would love to be entered!!

Is this where we enter? I've seen so much about this book and would LOVE to win it for my kids!
digicat{AT}sbcglobal{DOT}net

This sounds like SUCH a wonderful book! Thank you for the chance to win it.
HobartsMama@aol.com