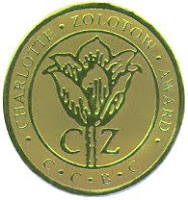 I know I just put up a post about the Cybil Awards, but I just have to mention the winner of the 2010 Charlotte Zolotow Award. Here are excerpts from a press release that I found online on the CCBC website about the award.

What Can You Do with a Paleta? by Carmen Tafolla is the thirteenth annual winner of the Charlotte Zolotow Award for outstanding writing in a picture book. The award is given by the Cooperative Children's Book Center (CCBC), a library of the School of Education at the University of Wisconsin-Madison. 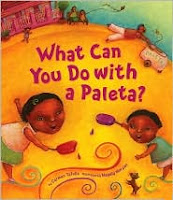 A delectable story of a young Mexican-American child’s delight with an ice pop on a hot summer day is at once culturally specific and universal. Author Carmen Tafolla playfully appeals to all of our senses with rich imagery and crisp language. She invites us to think of all the creative things that can be done with a paleta, from painting your tongue purple or giving yourself a blue mustache to making a new friend or learning to make tough decisions. A sprinkling of Spanish words and Magaly Morales’ sun-warmed acrylic illustrations add details of
life in a vibrant barrio where the daily arrival of the paleta wagon is met with anticipation and celebration. What Can You Do with a Paleta? was edited by Abigail Samoun and published in the United States in 2009 by Tricycle Press.


The 2010 Zolotow Award committee named three Honor Books:
The 2010 Zolotow Award committee also cited four titles as Highly Commended:
Established in 1998, the Charlotte Zolotow Award honors the work of Charlotte Zolotow, a distinguished children's book editor for 38 years with Harper Junior Books, and author of more than 70 picture books, including such classic works as Mr. Rabbit and the Lovely Present (Harper, 1962) and William's Doll (Harper, 1972). Ms. Zolotow attended the University of Wisconsin in Madison on a writing scholarship from 1933 to 1936, where she studied with Professor Helen C. White. The award is given annually for outstanding writing in a picture book
for children in the birth through seven age range published in the United States in the preceding
year.

I found an interesting article about awards chatter on the blogosphere yesterday. You can view it here on the Publisher's Weekly website, and I am beginning to wonder if I too should jump on this mock award bandwagon. It might be fun!
Posted by Marya Jansen-Gruber at 11:30 AM

I'm so glad I read this post, because I never thought much about a) what the C. Zol award was for, and consequently b) never knew there *was* an award for oustanding writing in a pb. Now I know both, and will pay attention. Though I love picture book pictures, I must admit that I care a lot about the story, too.

Jessica: I too love a picture book that has a compelling text. Sometimes the language itself is so beautiful that you forget to look at the art. Then you go back and pay attention to the art as well and you get another delightful bookish experience.

As Marketing students in universities worldwide, many of you might have to write a dissertation paper as a final project before you complete your bachelor's degree.here