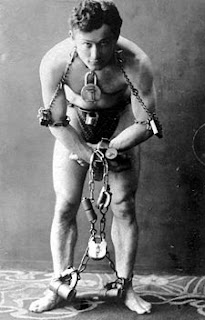 On this day in 1874 a very singular person came into the world. His name was Erik Weiss, but when he was a young man he took on a different name, a name that he felt would better suit his career as a performer; he called himself Harry Houdini.

Houdini began his career as a magician, but he soon focused his energies on developing exciting escape acts. He broke out of handcuffs, jumped off bridges with chains wrapped around him, and he was even able to escape from a milk can full of water. No one knew how he did these amazing feats, and he was soon famous all around the world.

I have reviewed a selection of books about Houdini, which you can view here on the TLLG website. I particularly liked The Houdini Box by Brian Selznick. In this title, Selznick beautifully combines fact and fiction to give readers a story that is both fascinating and thought provoking.

For young readers who like a good mystery there are the Houdini and Nate Mysteries. In these titles, a young boy - with Harry Houdini's help - solves some thrilling and often dangerous mysteries.
Posted by Marya Jansen-Gruber at 12:19 PM