The first day of summer

Today is the first day of summer for us here in Oregon, and though it is not exactly hot, at least it isn't cold anymore. I have some great summer books on the TTLG website. For children who are specifically interested in the summer solstice and what it is, there is this title to read. Enjoy. 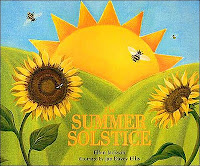 Ellen Jackson
Illustrator:  Jan Davey Ellis
Nonfiction Picture Book
For ages 7 to 10
Millbrook, 2001   ISBN: 978-0761319856
Because the sun is so important to life on earth it was greatly venerated by the ancient peoples who lived on this planet. Often it was considered to be a god and thus on the day when the sun was at its highest point in the sky, the summer solstice, special rituals and celebrations were often held.
Both in the and in circles of stone marked the passage of the sun in the sky and special spokes in the circles "pointed to the place where the sun rose on the summer solstice."
In Europe and people would roll burning wheels down a hill to symbolize the blazing sun sinking in the sky. There would be great feasting, dancing, and merrymaking and people would get dressed up in outlandish costumes.
Today remnants of these old traditions can still be found in some countries in . In , and people still light bonfires on hill tops on Midsummer Eve and in tall poles are decorated with leaves, colored streamers and flags and placed in a central place. People then dance around the pole in celebration of the longest day of the year.
Posted by Marya Jansen-Gruber at 1:43 PM