An Interview with Tim Warnes, Chalk, and Cheese

TTLG: Tim, how did Chalk and Cheese come into your life?
Tim: It all started back in art college in the early ‘90s. I’d been to  New York for a few days, and came back with lots of reportage drawings of the city which I used as the backgrounds for a series of illustrations based on dog phrases; for example ‘doggone’ and ‘doggy bag’. That’s when the first version of Chalk appeared. I developed the visuals further into the idea of an English rat visiting the dog in dog. The idea sat in a drawer for over 10 years until my editor at Simon & Schuster spotted it and asked me to develop it further. That’s when I hit upon the idea of basing the characters on me (Chalk) and my son, Noah (Cheese), who was aged about 5 at the time.

TTLG: Tim, I am a huge fan of your online comic strip. Tell me why you started it and what it is like to work using a blog format.
Tim: I started the comic strip for a number of reasons, the main one being because I needed to let it out! I desperately wanted to do the original picture book as a graphic novel for kids (I love the work of Posy Simmonds) but my editor wouldn’t let me take it that far. After Chalk and Cheese was published, I continued to jot down conversations with Noah, only now I’d sketch them being said by Chalk and Cheese. It’s just sort of grown from there.
I’ve always loved reading comic strips, and my mind seems to naturally write in that way. I also thought it’d be a fun way to promote the book, but was reluctant to commit to doing a regular strip. But seeing how people used the blog format encouraged me to take the plunge, making it possible to publish it with no financial cost to me. It’s a great creative outlet as it’s my chance to produce something exactly as I’d like to, without having to run it by designers and editors (I do show it to Noah and my wife, children’s illustrator Jane Chapman, though. Noah’s quite a comic book aficionado himself, so I really respect his thoughts).

TTLG: Cheese, you’re a country mouse in a foreign city. What’s that like for you?
Cheese: TOTALLY AWESOME! I like living in the countryside, but I like more. ’s a bit like , cos you speak English except with Australian accents. But it’s different too cos everything’s so big. And you’ve got King Kong.
TTLG: Is there anything you miss about the countryside?
Cheese: No, not really.
Chalk: Nothing at all?!
Cheese: Well, the only thing that’s sort of different about the countryside is the walks, and I don’t really like them anyway. At least in I’ve got someone to carry me.
TTLG: Chalk, you’re best friends with Cheese, but you’re quite different. How’s that work?
Chalk: I try not to do anything Cheese doesn’t want to.
Cheese: Otherwise I might sulk. Wait a minute - sometimes we do do stuff I don’t want to, it’s just I don’t want to say... like I never really want to go for a walk, and I’m never too keen on not going to a toy shop.
TTLG: What’s the best thing you’ve done so far in , Cheese? 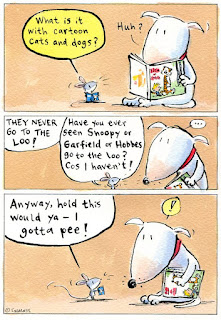 Cheese: I liked skating at Rocky Fella’s!
Chalk: No you didn’t - you hated it!
Cheese: Did I?... I can’t remember.... oh yeah! I like meeting cockroaches - Cutey Pops was my favourite. I wonder how that lil fella’s doing? I ‘spect he’s still in the subway. I’m not a big fan of the subway. It’s dark and it smells. Why d’you call it the sub anyway?  In we call it the Underground. You speak funny in .
TTLG: Is there anything you’d like to do in that you’ve not tried yet?
Cheese: Why are you asking me all these questions anyway? Is it an interrogation? Am I under arrest...?!
Chalk: I’d like to take Cheese to a museum or maybe...
Cheese: What I’d really, really love to see is Kong. Or a hillbilly. And I’d like to go to Gimbel’s. You know, the giant toy shop from Elf ?h
Chalk: Gimbel’s closed down years ago, Cheese.
Cheese: WHAT?! Well that sucks. Anyway, can we stop now? I’m bored.
TTLG: One last question. I see from your strip that you both enjoy books. What are you reading at the moment?
Chalk: The Complete Peanuts 1959-1960 and Understanding A.D.H.D.
Cheese: What was the question again...?

Thank you so much Tim, Chalk and Cheese. I would like to mention that Chalk and Cheese are being included in the Team Cul de Sac project to raise awareness and funds for Parkinson's research. Team Cul de Sac was formed as a project by Chris Sparks and cartoonist Richard Thompson, the creator of the awesome 'Cul de Sac' comic strip, who was diagnosed with Parkinson's disease. The idea was to have an open invitation to artists to submit their takes on Richard's characters in whatever way they wanted (unsurprisingly the majority took the opportunity to place the 'Cul de Sac' characters in their own comic universes!) The book is going to be released in June 2012.
Posted by Marya Jansen-Gruber at 4:46 AM