When I was a child I often heard people say "I don't know what I would do if I didn't have my dog." I knew that what they were saying was that their dog were important to them, but I didn't fully appreciate the meaning behind the words until I was an adult with dogs of my own.

I spend many hours working at home alone, or at least without other humans around. My cats, being the independent beings that they are, go off to do their own thing, but my dogs lie on beds under my desk, preferring to keep me company. Their companionship is priceless, as are their smiles, their silly games, and their demands for affection.

Today's poetry title takes a look at the world of dogs, and it is a title that dog lovers of all ages will appreciate. The author, Dave Crawley, has also created another collection of poems called Cat Poems, which I greatly enjoyed reading. 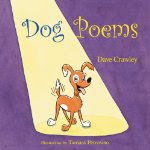 Dog Poems
Dave Crawley
Illustrated by Tamara Petrosino
Poetry Picture Book
For ages 7 to 10
Boyds Mills Press, 2007, 978-1-59078-454-9
Dogs come in a wide variety of colors, shapes, and sizes. There are poodles with their pompoms who “strut in the park” looking very chic, and then there are “saggy baggy” Basset hounds with their “mournful eyes and wrinkled skin.” Some dogs, like the “shaggy” sheepdog work for a living, while others are pets who have their owners wrapped around their paws.
It does not matter if a dog is a tiny feisty Chihuahua, an enormous gentle Great Dane, or some other breed; it can be depended on to be a good friend, a companion to take on walks, and someone to “snuggle wuggle” with.
Some dogs are active, like the Labrador who loves to play in bodies of water. Others, like “Lazy old Mazy” are active only in their dreams. In real life lazy Mazy dozes and snoozes for hours on end. Many dogs are smart hounds who know how to stay out of trouble. They know, for example, that porcupines and skunks are best left alone. Others are not so savvy, and they end up with quills in their noses or, thinking that a skunk is a “kitty,” end up paying dearly for their mistake.
In this wonderful collection of poems, Dave Crawley celebrates dogs and their doings in a unique way. He introduces us to some popular breeds, and he also tells us the stories of certain dogs. Then there are more general poems that look at certain aspects of dog behavior. For example in “In Telling a Tail,” we learn how to ‘read’ dog tails, and in “Slobberkiss” we see why dogs are so fond of giving the human they love a big wet lick.
With humor and an obvious love for dogs, Dave Crawley celebrates dogs in all their furry, barky, smelly, and slobbery glory.