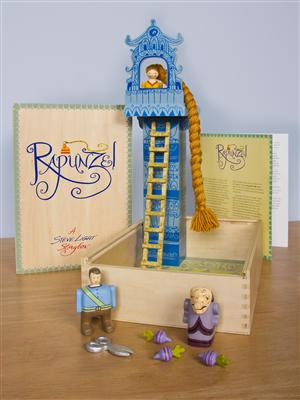 If you spend any time watching young children playing with their toys, you will soon see that many of them make up stories, acting out their tales and using different voices for their characters. Steve Light is a born storyteller, and he has created some beautiful Story boxes that children and their grownups can use to explore classic fairy tales. So far he has created Story boxes for Hansel and Gretel (a German fairy tale), Rapunzel (another German fairy tale), The girl who Loved Danger (an African story), and Little one Inch (a Japanese story.)

I am lucky enough to have received one of the Story boxes to take a look at and I am charmed by it. My Rapunzel box is a nice wooden box that has a top that slides open. When I opened the box, I discovered that the box has a scene painted into the bottom, which serves as a backdrop for the story. There are three  characters, three turnips, a pair of scissors, a ladder, and a tower, all of which are made of hand painted wood. There is also a long yellow yarn braid that serves as Rapunzel's long hair.

I had a lot of fun trying out the box and plan on taking it to the elementary school where I volunteer as a reading helper. The booklet that comes with the book contains the story of Rapunzel, which adults and children can use and embellish as they wish.

Wanting to know how he came up with the idea of his Storyboxes, I asked Steve to tell me about them. This is what he told me:

I have always loved to draw and make things. I love writing and illustrating stories in my children’s books, whether it is the sounds a truck or train makes, or how a giant makes all the wrapping paper for Santa. Even when making a piece of fine art, the picture has to have a story or it will not work for me as an artist. I also have the great fortune to be a Pre-K teacher for a class of 4 and 5 year olds. I tell stories to the class almost everyday. At one point I was just a storyteller for a school and visited 10 classrooms sharing different stories with each of them. One class loved the story of Hansel and Gretel and would ask me to tell it over and over again.
As an illustrator and “maker of things,” I one day saw two pieces of wood in my workshop that were the same size and so I decided to carve Hansel and Gretel. I brought the two tiny figures to the class and told the story acting it out with the small wooden characters I had carved and painted. After I finished the story, the children asked, “Where is the witch, and the cottage, and the father?” I went home that night and carved all the other characters and props I needed for the story. I found a wooden box to put them in and painted a “title” on the box like a cover to a story book and storyboxes were born!
I went on to making a total of 13 boxes, telling them to children in schools, libraries and museums everywhere. Guidcraft approached me and asked to recreate the storyboxes so other teachers, parents and kids could use them to tell stories. I was excited to work with them because I had used their products in my classroom for years and was aware of the quality that they put into everything they make. Guidecraft made casts from each of my hand carved figures so they look exactly like the figures and props that I use.
Storytelling is such a great thing to share with a child. For my storyboxes to be in other classrooms where other teachers can make them their own and add their own ideas to them is what the oral tradition of storytelling is all about. When I tell a storybox in my classroom, I see my pupils adding narratives to their block play and making their own storyboxes out of paper. Telling a story to a child shares that love that leads to them wanting to read and write. I am so thrilled to be able to share my passion for storytelling with even more children now that my storyboxes will be available. There is an old proverb that says: People need stories more than bread, stories show them how to live and why.


Here is a video showing Steve Light using his Rapunzel Story box to tell the story to a classroom of young children.


Perfect for home and classroom, each Story box features characters, props, and settings cast from Light’s hand-carved originals, along with a booklet containing his original retelling of the story. In addition to the main characters, each Story box contains unique elements:
- Hansel and Gretel includes a bag of “breadcrumbs,” witch’s house, cauldron, and recipe book
- Kids can build the tower and thread Rapunzel’s long, braided hair out the window
- Little One Inch features a beautifully-detailed Big Fish and colorful Oni Monster
- The Girl Who Loved Danger features a brilliantly-patterned Ancestor Bird and fabric, hand-puppet Lake Monster
Light’s appealing art and vivid imagination also grace his board book, Trains Go (Chronicle), which follows the popular Trucks Go. “Each of Light’s trains has a distinct personality,” writes Publishers Weekly, “and locomotive lovers will clang, chug, and puff along with them as they make their way along the tracks.”
Steve Light is the author and illustrator of many children’s books. His design work can be found in the Smithsonian Cooper Hewitt Museum, and his corporate clients have included AT&T, Sony Films, Absolut Vodka, United Airlines, and the New York Times Book Review. Light lives in New York City.
Posted by Marya Jansen-Gruber at 6:44 AM