Hugless Douglas is one of my favorite children's picture book characters. He is a big bumbling bear who often gets things wrong, but he is so sweet and lovable that no one really minds. In today's picture book title you will find out what happens when Douglas goes to a friend's house to spend the night. 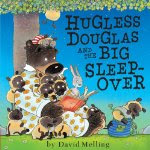 Hugless Douglas and the big sleepover
David Melling
Picture Book
For ages 4 to 6
Tiger Tales, 2013, 978-1-58925-116-8
Hugless Douglas the bear is very excited because he has been invited to a sleepover at Rabbit’s house. Douglas packs a bag and then he sets off full of hope and anticipation. Douglas gets stuck in a tree, and then he manages to get lost. He decides to climb a tree so that he can see where he is, but unfortunately the tree he chooses isn’t really suited to being climbed by a large and heavy bear. The tree bends lower and lower to the ground and then Douglas falls into a bush on top of Little Sheep.
Little Sheep knows the way to Rabbit’s House and Douglas is sure that there is more than enough room at Rabbit’s for one little sheep and a bear. Paw in paw they walk to Rabbit’s burrow and when they get there Douglas realizes that he brought more than one sheep with him. In fact there are ten sheep in all. Rabbit is not at all concerned about the arrival of so many guests. In fact, she is delighted to see all the sheep.
The sheep manage to get through Rabbit’s rather small doorway, but there is no way Douglas is going to be able to squeeze through the snug entrance. They are going to have to rethink their sleepover plan.
Readers who have enjoyed the other Douglas Douglas books are going to love this new adventure. Once again Douglas gets himself into a spot of trouble, and once again his misadventures are laugh-out-loud funny. The expressions on the faces of the characters and the situations they get into are deliciously ridiculous. This book is a must for anyone who needs a little pick-me-up.