Poetry Friday - A review of A Poke in the I: A Collection of Concrete Poems

The first concrete poem I encountered was The Mouse's Tale which appears in Alice's Adventures in Wonderland.  I thought it was a very clever poem and enjoyed reading it out loud with my father. I did not encounter another concrete poem until a few years ago, and I was delighted to see that this unique poetry form is becoming more and more popular. 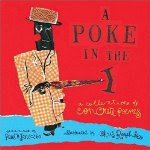 A poke in the I: A collection of concrete poems
Paul B. Janeczko
Illustrated by Chris Raschka
Poetry Picture Book
For ages 6 to 9
Candlewick Press, 2005, 978-0-7636-2376-0
For most of us a poem is a form of writing where words are presented to the reader in creative ways to conjure up images, thoughts, and feelings. How the words look on the page is not really that important. Concrete poems are still a form of poetry, but their appearance matters a great deal. They are “visually arresting” because the poet has tried to create a visual effect with his or her words in addition to an intellectual and emotional effect.
For this splendid collection of concrete poems, Paul Janeczko has chosen poems that are presented in unique pictorial ways. For example in Skipping Rope Spell by John Agard, the lines of the poem are not presented in well behaved rows that stretch from left to right. Instead, they swirl across the pages, twirling the way skipping ropes do when they are circling through the air.
In Sylvia Cassedy’s poem Queue the words stand in a neat line down the page, one word under the other, just the way people stand in a line when they are waiting for a bus at a bus stop. Similarly, the words in the poem Popsicle are arranged to look like a popsicle, a rectangle of words describing the melting sweet summer delight that ends with the word “sticky,” which forms the popsicle’s stick.
In Sky Day Dream, the poet Robert Froman creates pictures of floating thoughts that drift up the pages like clouds, getting smaller and smaller the higher up the page they go. Surely this is exactly what happens to our thoughts when we lie in the grass daydreaming about this and that.
This is a perfect book to share with readers who are under the impression that poetry is dull and perhaps even inaccessible. The poems, paired with Chris Raschka’s multimedia artwork, show to great effect how visual, unusual, and funny poems can be.
Posted by Marya Jansen-Gruber at 4:00 AM