When we are presented with something that is out of the ordinary many of us overreact, often in a negative way. We are suspicious and prone to consider the unfamiliar something to be potentially dangerous. In today's picture book the author shows to great effect how such suspicious and distrustful behavior can create an environment that lacks open mindedness and a willingness to listen and observe. What is remarkable about this book is that the author manages to convey his powerful message with humor and sensitivity. 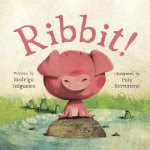 Rodrigo Folgueira
Illustrated by Poly Bernatene
Picture Book
For ages 6 and up
Random House, 2013, 978-0-307-98146-2
One morning the frogs who lived in a pond woke up to find that they were no longer alone. There was a pink pig sitting on a rock in their pond, and when the chief frog asked “What can we do for you?” the pig answered “Ribbit!” Not surprisingly, the frogs were astonished when they heard this. Did the pig think it was a frog? Was it making fun of them?
The other animals soon heard about the pig at the frog pond and they came to see what was going on. “Why would a pig want to be a frog?” a parrot wondered aloud. Naturall, the frogs found this comment offensive and soon all the animals were shouting at one another.  The animals laughed at the situation, except for the frogs, who were getting more and more annoyed. Finally the frog chief decided that they needed to consult the wise old beetle. Surely he would be able to explain the pig’s strange behavior.
Often, when a strange situation presents itself, people get into a tizzy. They argue, they hurt each other’s feelings, and they analyze everything more than is necessary. This book shows readers that sometimes the reason for a person’s behavior is very simple. Sometimes the answer we are looking for is right there, and all we have to do is to think less and feel more and we will find the answer.
With lovely expressive illustrations and a story that is timeless and ageless, this picture book explores an important topic with sensitivity and gentle humor.
Posted by Marya Jansen-Gruber at 4:00 AM