Picture Book Monday with a review of Peddles


I have the privilege of knowing a  lot of people who have jumped into the unknown to pursue their dreams. It is wonderful to see their ideas come to life as they open up shops and businesses that are an extension of themselves. It takes courage to go after a dream, to dare to do something that perhaps other people tell you cannot be done. In today's picture book you will meet just such a dreamer. Peddles the pig wants more out of life, and he dreams of doing things that 'normal' pigs never even consider doing. 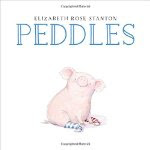 Elizabeth Rose Stanton
Picture Book
For ages 4 to 6
Simon and Schuster, 2016, 978-1-4814-1691-7
Peddles is a pig who lives on a farm with lots of other pigs, all of whom do the kinds of things you would expect farm pigs to do. They eat from a trough, oink and root, sleep and well…you get the idea. Peddles is not like the other pigs. Though he ponders the same things that his pig friends think about, he thinks about them “differently.” He thinks about pizza instead of slop, and bathtubs instead of a mud puddle. He has ideas about what it would be like if he could fly like a bird or jump like a frog. Peddles even dares to imagine what it would be like if he could go out into space.
The other pigs think that Peddles’ dreams and ideas are ridiculous, and they advise him to “Get your head out of the clouds.” The thing is that Peddles cannot change who he is, and so he goes on having ideas and dreams, though none of them come to anything, which is rather disheartening.
Then, one night, Peddles sees a gathering of people in the barn and they are dancing, stomping their cowboy boots, and “twirling and whirling.” Peddles has an idea. A marvelous idea, and maybe this time it will be an idea that turns into something wonderful.
In this charming picture book, children will meet a superlative pig, a pig who has big aspirations. Unfortunately, he lives in a world where pigs are not supposed to want more out of their lives. They are supposed to be content with being ordinary pigs.
Children are going to love seeing how Peddles pursues a dream, and how his determination and hope affects the pigs around him and thus brings about a very real change.