Picture Book Monday with a review of Buddy and Earl

We all tend to label people, even when we try not to, and often the labels come with a certain amount of judgement. All too often our preconceptions of people are way off the mark, and sometimes they are unkind and hurtful as well.

In today's picture book we see how the labels we like to put on people are a waste of time and counterproductive. All that really matters are the relationships that we build together. 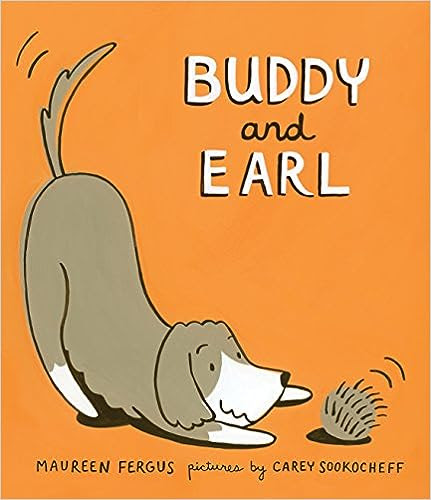 Buddy and Earl
Maureen Fergus
Illustrated by Carey Sookocheff
Picture Book
For ages 5 to 7
Groundwood, 2015, 978-1-55498-712-2
One rainy day Buddy is feeling “bored and a little lonely.”  Thankfully, his person, Meredith, comes into the room where Buddy is sitting and life gets interesting again. Meredith is carrying a box, which she puts on the floor. She tells Buddy to “stay,” but the dog, after scratching an itch, forgets all about the command he was given and he goes over to the box to investigate. Inside the box there is a strange prickly thing, which Buddy sniffs and sniffs. He considers licking the thing but decides that this might not be such a good thing to do. Then the thing begins to snuffle and hiss. Buddy is thrilled. The brown, prickly thing is alive!
Buddy introduces himself and the thing says that he is called Earl. Earl then proceeds to tell Buddy that he is a racecar, a giraffe, a sea urchin, and a talking hairbrush. Buddy knows full that that Earl isn’t any of these things and he points out why Earl cannot be a car, a giraffe or a sea urchin.
After this rather peculiar discussion, Earl then decides to try and guess what Buddy is. He is convinced that Buddy is a pirate, and before logical Buddy can explain that he is a dog and not a pirate at all, he and Earl are having a wonderful adventure on the high seas.
This wonderful book explores the nature of friendship, and it also looks at how important it is to connect with others in a meaningful way that sets asides labels. Children and adults alike will be touched when they see that Buddy eventually figures out who Earl is. It turns out that what really matters is not what you are, but who you are.