Picture Book Monday with a review of Santa Calls

In a week it will be Christmas Day. At this time next Monday we will be putting our meal in the oven, and then perhaps we will take the dogs for a walk to build up an appetite for the feast to come. It seems very fitting therefore that today's picture book should be a book about Father Christmas or Santa Claus. It is a wonderful story that I think truly captures the spirit of the season. Plus I cannot resist books by William Joyce. How I love his retro style art. 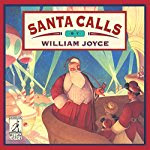 Santa Calls
William Joyce
Picture Book
For ages 5 to 7
Simon and Schuster, 2017, 978-1-4814-8959-1
It was just before Christmas Day when a most mysterious looking box appeared outside the home belonging to Art Atchinson Aimesworth’s aunt and uncle. Art and his little sister Esther had been orphaned, and they now lived with their aunt and uncle on their farm in Abilene, Texas. Art and his best friend Spaulding examined the box with great interest, and when they poked it the words, “Open the box. Assemble the contents. Come NORTH. Yours, S.C.” appeared on it.
Santa Claus himself had summoned them! No one in their right mind would consider ignoring an invitation from the great man, and so the boys set about assembling the machine that they found inside the box. It was not long before the flying machine that was going to carry them to the North Pole was ready – with one big modification. At first Art was determined that Esther would not go on the trip, but in the end he allowed her to join the adventure.
Soon enough the children arrived at the North Pole, and they were welcomed by the captain of the Santarian Guard, who came to collect them in a dogless sled. They did not get far before they were attacked by an army of Dark Elves. The Queen tried to kidnap the children but all three of them were very handy their sling shots and snow balls, and Esther even managed to hit the Queen herself.
When they reached Toyland, and what a wondrous place that was, they met Mrs. Claus and then Santa. Art was eager to know why Santa had summoned them, but the wonderful man only said, “Some mysteries are best left unsolved.” He then invited the children to go on his famous Christmas Eve ride, which they were happy to do. Unfortunately, they did not get far before the Dark Elves kidnapped Esther and carried her off.


William Joyce has a gift for creating delightful stories that have a delicious retro feel. Children will be thrilled when they see the rich worlds that cover the pages of this book; worlds that take us back in time, and that also take us to the fantastical place that Santa calls home. The purpose of Art’s visit to Toyland is kept from us until the very last moment, when all is revealed. Then we can smile, knowing that Santa always listens to the hopes of dreams of little children.
Posted by Marya Jansen-Gruber at 3:56 PM