Please look after this bear. 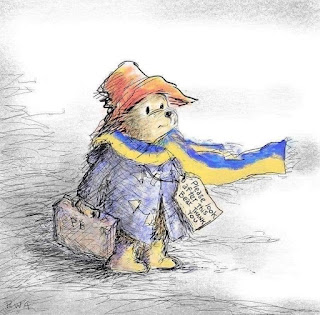 Mr. Bond, touched by what he saw,  recalled those memories 20 years later when he began his story of Paddington Bear.  One morning in 1958, he was searching for writing inspiration and simply wrote the words: “Mr. and Mrs. Brown first met Paddington on a railway platform…”

“They all had a label round their neck with their name and address on and a little case or package containing all their treasured possessions,” Bond said in an interview with The Telegraph before his death in 2017. “So Paddington, in a sense, was a refugee, and I do think that there’s no sadder sight than refugees.”

Paddington Bear - known for his blue overcoat, bright red hat, and wearing a simple hand-written tag that says “Please look after this bear. Thank you,” Paddington embodies the appearance of many refugee children. His suitcase is an emblem of his own refugee status.

“We took in some Jewish children who often sat in front of the fire every evening, quietly crying because they had no idea what had happened to their parents, and neither did we at the time. It’s the reason why Paddington arrived with the label around his neck”.

Michael Bond died in 2017 aged 91. The epitaph on his gravestone reads "Please look after this bear. Thank you."

Please look after all the young Bears from all around the world who are having to flee conflict and war.

Posted by Marya Jansen-Gruber at 9:10 AM