Women's History Month - Emma Lazarus, an activist and author of poetry and prose. 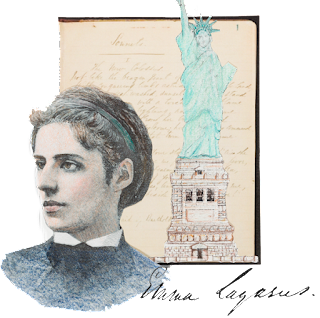 In 1883 and American poet called Emma Lazarus wrote a sonnet called The New Colossus. She wrote the poem to raise money for the construction of a pedestal for the Statue of Liberty (Liberty Enlightening the World). In 1903, the poem was cast onto a bronze plaque and mounted inside the pedestal's lower level.
The New Colossus
Not like the brazen giant of Greek fame,
With conquering limbs astride from land to land;
Here at our sea-washed, sunset gates shall stand
A mighty woman with a torch, whose flame
Is the imprisoned lightning, and her name
Mother of Exiles. From her beacon-hand
Glows world-wide welcome; her mild eyes command
The air-bridged harbor that twin cities frame.
"Keep, ancient lands, your storied pomp!" cries she
With silent lips. "Give me your tired, your poor,
Your huddled masses yearning to breathe free,
The wretched refuse of your teeming shore.
Send these, the homeless, tempest-tost to me,
I lift my lamp beside the golden door!"
Below is a a review of a marvelous award wining book that tells the story of Emma Lazarus and her famous poem.
Emma’s Poem: The voice of the Statue of Liberty 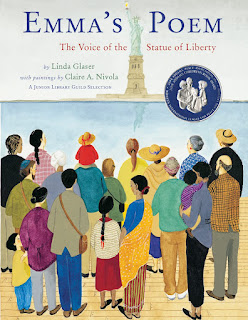 Linda Glaser
Illustrated by Clair A. Nivola
Nonfiction Poetry Picture Book
For ages 5 to 7
Houghton Mifflin Harcourt, 2013, 978-0544105089
When Emma was little she had a very comfortable life living in a lovely, large home with her mother, father, and siblings. She lacked for nothing, and was able to indulge in her love of books. She had the time to read, and spent many hours writing stories and poems. The people she spent time with came from similarly comfortable backgrounds, and the world of New York’s well-to- do people was the only one she knew.
Then one day Emma visited Ward’s Island in New York Harbor and there she met immigrants who had travelled across the Atlantic as steerage passengers. They were poor and hungry, and many of them were sick. They had so little and had suffered so much. Like Emma, they were Jews, but unlike her they had been persecuted and driven from their homes. Friends and family members had died, and now here they were in a strange land with no one to assist them.
Emma was so moved by the plight of the immigrants that she did her best to help them. She taught them English, helped them to get training so that they could get jobs, and she wrote about the problems that such immigrants faced. Women from her background were not supposed to spend time with the poor, and they certainly did not write about them in newspapers, but Emma did.
Then Emma was invited to write a poem that would be part of a poetry collection. The hope was that the sale of the collection would pay for the pedestal that would one day serve as the base for a new statue that France was giving to America as a gift. The statue was going to be placed in New York Harbor and Emma knew that immigrants, thousands of them, would see the statue of the lady when their ships sailed into the harbor. What would the statue say to the immigrants if she was a real woman? What would she feel if she could see them “arriving hungry and in rags?” In her poem, Emma gave the statue a voice, a voice that welcomed all immigrants to America’s shores.
In this wonderfully written nonfiction picture book the author uses free verse to tell the story of Emma Lazarus and the poem that she wrote. The poem was inscribed on a bronze plaque that is on the wall in the entryway to the Statue of Liberty’s pedestal. It has been memorized by thousands of people over the years, and has come to represent something that many Americans hold dear.
At the back of the book readers will find further information about Emma Lazarus and her work. A copy of her famous poem can also be found there.
Posted by Marya Jansen-Gruber at 7:00 AM