An interview with Keith Szafranski 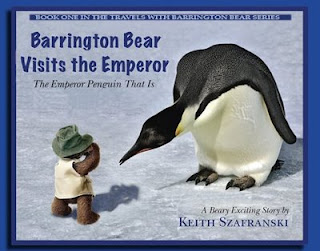 starring Barrington, a bear who loves to travel and who takes photographs of the things he sees. You can read my review of the first Barrington book, Barrington visits the Emperor on the Through the Looking Glass Book Review website.
This is what Keith had to say about his books and his work:

Where did you get the idea for your Barrington Bear stories?
About 2 1/2 years ago an artist friend of mine suggested I use my photographs to do a children's picture book. She had recently come out with one using her artwork and was doing very well with it selling them at the various
art shows she did around the country. The idea intrigued me but is was almost two years before I came up with an idea that I liked. One day, in April 2007, my wife and I were walking the dog and this idea of having some sort of stuffed critter take my place on all of my travels came to me literally out of nowhere. I really liked the idea and started working out some of the details. Less than a year later the first Travels With Barrington Bear book was released.
Is he your bear and where did his name come from?
Yes, Barrington is my creation. I designed and sewed Barrington and all of his clothes. I really did not want a bear at first because so many people used bears in their stories. But eventually I succumbed and Barrington was 'born.' When it came time to name my bear I went to babynames.com. At first Barrington was going to be a photographer just like me. I wanted his name to go with either 'bear' or 'photographer' so I looked through boys names under 'b', 'f' and 'ph'. I listed about 60 names I liked and then started the process of elimination. I soon decided against having Barrington be a photographer as such and just have him be a bear that liked to take photographs. That eliminated all of the 'f' and 'ph' names and just left the 'b's'. I then started going through the list again, checking online to see if anyone else had used a particular name for a bear. I always passed over 'Barrington' because I really liked it and eventually quit the elimination process and went with Barrington.

How did you incorporate the image of Barrington into your photos so well?
Each of the first two books has only one image where Barrington was actually in the shot as taken. In all of the rest I used Photoshop to place him in the image. This is the most fun aspect of doing these books for me. Like most Photoshop
skills that I possess, adding Barrington to a scene so it looks like he is really there just took practice. I learned as I went along. I do everything pretty much by 'hand'. I know there are faster and perhaps easier ways to incorporate the little bear into the original photos but I don't think they work as well. I even draw Barrington's shadow like the one on the cover of Emperor by hand.

Clearly you went to see the Penguins in the Antarctic. What was it like?
I have been to Antarctica twice. Once was pretty much just for the Emperor penguins. That's the trip the first story is based on. The other time was for several species of penguin as well as seals, albatross and many other birds and animals. It's a gross understatement to say that Antarctica is an amazing place, especially the penguins. The Emperors see very few people during the year and so are quite 'tame'. While we as tourists are not allowed to approach the birds closer than 15 feet, it is okay for the penguins to come closer to us and they often do. I had literally thousands of penguins going about their daily routine of eating, sleeping, preening and taking care of their young within arms length. I hope I can see them again someday.

You have written one more book about Barrington's adventures. Do you have plans for many more?
After I first came up with the idea of Barrington, I quickly wrote down about ten book titles for the series and have since added two or three more that came to mind. I could probably go on ad infinitum with the series but will most likely limit the total to somewhere between twelve to fifteen books. Assuming they sell well enough that is. I have already begun work on book three in the series, Barrington Bear's Yellowstone Adventure.

When you are not writing about Barrington you are a professional photographer. How did you get interested in this field?
Well, to tell you the truth, the traveling actually came first. I always like to travel and see new places, especially the mountains. My wife and I took the kids out west a few times while we were living in Wisconsin. I was usually unhappy
with the photographs that I returned with from these trips. I was using an inexpensive instamatic camera at the time. Then, in 1979, a few months before a vacation to Arizona I decided to buy an inexpensive 35mm camera. It was almost love at first click. I really enjoyed the control I now had over my photographs. I practiced all the time. Four years after picking up the 35mm for the first time my wife and I quit our jobs and moved to Montana so I could pursue a career in wildlife photography.

What are you trying to do with your Barrington Bear books besides giving your readers something to smile and laugh at?
I really want to teach the reader something about the world around them. Not just information about places and animals but also the seemingly unimportant things like how you get from Montana to Antarctica. I want to do this in a fun
way so the kids (no matter what age) will not realize they are actually learning something along the way. I try to make my stories as true to life as possible with a little whimsy thrown in. Most of the things that happen to Barrington on his travels really happened to me. Of course, I didn't get to dance with penguins. There are some advantages to being a bear!
Please visit Keith and Barrington at the Barrington Bear Website.
Posted by Marya Jansen-Gruber at 6:45 AM