An Interview with Susan Wittig Albert 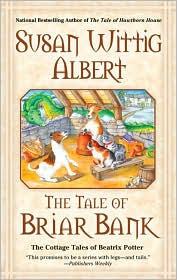 I recently reviewed the latest book in the Cottage Tales of Beatrix Potter series. The Tale of Briar Bank is a delightful read, and anyone who read the Beatrix Potter Tales when they were little will greatly enjoy this collection of stories. Because I enjoy these tales so much I thought I would interview the author, Susan Wittig Albert.
1. How did you get interested in writing about Beatrix Potter for your series, The Cottage Tales of Beatrix Potter?
Under the name Robin Paige, my husband (Bill Albert) and I were writing a mystery series set in the early 1900s, featuring real people. I had always enjoyed Beatrix’s stories, and suggested that we use her as a character. We did, in a book called Death at Gallows Green. I enjoyed finding out about her and thought she’d make a wonderful character in a continuing mystery series. That was in 1994 or 95. It was another five or six years before my writing schedule opened up enough to allow me to propose the series to my editor. She loved the idea and we went forward with it immediately.

2. Did you know in advance that this was going to be a series?
Yes. It has always been planned to be an eight-book series. As you probably know, mysteries are written in series, most of them open-ended (like the China Bayles series, which I also write). In this case, I had a definite time period in mind: 1905 (when Beatrix bought Hill Top Farm) through 1913 (when she married Willie Heelis and moved permanently to the village of Sawrey).

3. Have you visited the Lake District where the stories in this series are set? If you have did you like it?
Yes, and I loved it! The land itself--much of which was purchased by Beatrix and Willie Heelis and donated to the National Trust--is simply gorgeous. I love the landscape, the climate, the animals, the people, and I wanted to represent them as fully as possible in the books. Most of the places I write about are real--you can see them on the maps in the books and also online, at www.cottagetales.com. Also online are photos of Hill Top Farm, Beatrix’s garden, and the surrounding area.

4. How did you decide to include the animal characters in the stories?
The real, honest truth is that Mrs. Tiggy-Winkle spoke up! I was writing a scene in which the animals (Mrs. T-W, Josie and Mopsy Bunny, and Tom Thumb the Mouse) were with Beatrix while she was sleeping. Quite by herself, Mrs. T-W decided to tell her story, so of course I had to let her have her say. I love it when something like that happens unexpectedly when I’m writing. But these animals belong to Miss Potter in a very real sense, of course: that is, they are her literary creations and are covered by copyright (now owned by her publisher). So my publisher had to negotiate their use through a license, giving me the privilege of using Miss Potter’s work in my books.

5. Do you have animals in your life?
Quite a few, since we live in the country. We have a cat named Shadow (she’s black with green eyes) and a dog--a heeler, a very bossy little dog named Toro, who thinks it’s his business to make sure that the household is organized efficiently. Out in the meadow, we have two cows, Blossom and Texas (Texas is a longhorn!) and a sheep named Mutton. On the lake are the geese and a flock of ducks. In our woods are deer, armadillos, raccoon, possums, skunks, and coyotes--and a great many birds, including bobwhites and wild turkeys.

6. Have you read a lot of books about Beatrix Potter?
Oh, yes. There’s a list at the back of every book, and another (longer) list on the website, at www.cottagetales.com. I love her and want to portray her as she truly was, an imaginative and creative artist, as well as a down-to-earth person who become one of the finest farmers and sheep-raisers in the Lake District.

7. What made you decide to include dragons in the latest book, The Tale of Briar Bank?
Thorvaald introduced himself to me and asked if he could join the crew! And of course, you never say no to a dragon--at least, not if you know what’s good for you. Actually, Thorvaald (once he woke up and understood his situation) prefers to live a rather undragon-like life. We’ll see more of him in another book, a little later on.

8. In the Cottage Tales books you really capture what Beatrix Potter was like. We see her doing her best to be a dutiful daughter and to please her difficult parents, and at the same time we see that she is determined to build a life for herself on her farm. When you learned about this conflict what did it make you feel?
We all live in our own times, don’t we? As a modern woman, it is easy for me to understand Beatrix’s desire for self-determination, and at the same time, very hard for me to understand why she would dedicate herself so fully to her parents. I have sometimes wanted to shake her very hard and say, “Get on with your life, you silly girl! These Potter parents of yours can take care of themselves.” So I’ve had to try to go inside Beatrix, as deeply as I could, to feel how conflicted she must have been, and to try to understand it, from the inside out. It’s a conflict that becomes even sharper as the books go on, and she wants to spend her life with Willie Heelis, rather than her parents. Resolving it is not easy for her.

9. Have you read all of Beatrix’s wonderful stories?
Yes, all of them, every one, from beginning to end, and several times. And I have read them aloud to my children, who loved them just as much as I.

10. I think that Beatrix’s tales are timeless. Would you agree?
I do agree--and I think that is an important part of her genius. So many of the stories for children written in her era are “dated”: we recognize them as being from a certain time. But Miss Potter’s stories speak to something in us that is the same whether we were born in 1895 or 1995, or whenever. Perhaps it is Peter’s mischievousness and refusal to play by the rules, or Jemima’s innocent naiveté, or Mrs. Tiggy-Winkle’s charming industry. Whatever it is, we enjoy it now just as much as Miss Potter’s first readers enjoyed it. At least, I think so!
To find out more about Susan Wittig Albert please visit her website. To find out more about this series visit the Cottage Tales website.
Posted by Marya Jansen-Gruber at 7:37 AM

Susan Wittig Albert's fictional accounts are wonderful and as accurate in background and content as any historian's could be. She's done a fabulous job and added the dimension of fictional mystery. For those who might like to know more about the real non-fiction Beatrix, please see my new biography of Beatrix Potter: A Life in Nature. (St.Martins/Owl 2008). It won the Lakeland Book of the Year. The first time to an American. Linda Lear (lear.linda@ gmail.com; www.bpotter.com)

I have read several books about Beatrix, and several collections of her letters, and I was very impressed with Susan Wittig Albert's attention to historically correct detail. I also love the way in which she blends fact and fiction. I look forward to the next installment.

Linda's book, A Life in Nature, is one of my strongest sources. It's on the resource list in all of the Cottage Tales. And big congratulations to Linda for winning the Lakeland Book of the Year! A much-deserved prize for a remarkable biography.