Let's face it. Vampire books are all the rage these days. Some are pretty dark, some are more like romances with fangs and a little (or a lot) of gore. And then there is Sucks to Be Me: The All-True Confessions of Mina Hamilton, teen vampire (maybe)!! In this book first timer Kimberley Paul tells the story of a would-be (maybe) vampire who is a pretty normal teenager, except for all the vampire business that is. The story is funny, touching, and a delight to read. After reading and reviewing this title I decided that I just had to 'talk' to the author and find out a little bit more about her and her book.

Kimberley Paul has been reviewing children's books for some time and she has a wonderfully quirky sense of humor, which you can see if you check out her main website, her review website, her review blog and her book blog. Yes, she is a very busy lady. 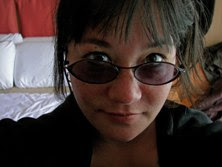 This is what she had to say when I interviewed her via email:


What made you decide to write a story about vampires?
There were a few things, though if someone had told me before I started writing the story that my first published book would be about vampires, I would have laughed at them. I was actually working on some other manuscripts (this was back in 2005), mostly fantasies. Then I read this YA book about vampires (which shall remain nameless) and it had a lot of references back to Dracula (which I’d studied more times than I’d like to count in college and high school). And it got a lot of stuff wrong, which really annoyed me. That started me thinking about vampires in general and how all the stories are all so angst-y and dark and full of blood and slayers and evil vampires, etc., etc. ad nauseum (not that I don’t enjoy some of those stories, mind you). I thought it would be fun to try and do something different. The first line came to me and I kept trying to think of ways I could turn the “normal” vampire story upside down, but still remain true to the fundamental vampire myths that have been passed down for centuries in pretty much every culture. And I wanted a book that anyone could enjoy, even if they don’t normally read vampire stories.

Mina’s character is incredibly true to life. How did you get inside her head so effectively?
Aw, thanks! I’ve actually had a few people ask me that and it especially makes me smile when a teen tells me how they feel like Mina is a real teen. My husband would probably say that I’ve got an inner snarky teen or that I’ve just never grown up, both of which are probably true. It was actually so much fun and far too easy to write as Mina.

Have you thought about continuing Mina’s story? I know that I, for one, would love to find out what happens next.
I’m working on a sequel now and I’m again trying to not do the “typical” thing, so I think some of the elements of the sequel will surprise people. I’m having a lot of fun with it. Of course, it will depend upon how well the first book does, so everybody who loves Mina, go out and tell your friends to get to know her too! J

Did you do a lot of research into vampires before you started writing this book?
Yes, though I’d also learned a lot in college studying Dracula and the like. I actually took a class with James B. Twitchell, who literally wrote the book on vampires. The excerpt from the paper that Mina wrote on Dracula that is in the book actually came in part from something I’d written in college (it obviously wasn’t a very formal research paper!). Once I started writing the book, I researched the vampire myth in many different countries (you’d be surprised by how prevalent it is).

Sucks to be me is not just a great story, there is also a meaningful message there. What do you think that message is?
Thank you! I think a lot of people miss that. While most of the reviews have been good, I’ve seen a couple where the reviewer thought that Mina chose what she did because of a boy (!) or they don’t understand why she even debates the decision at all, which completely misses the point, I think. I definitely didn’t write it to be a “message book” but I wanted some good messages to be in there, if you want to find them. There are a few, to me…like being true to yourself and not doing things just because people expect you to…standing up for yourself and your friends and for what you feel is important…that things are better when you communicate…that family and friends matter…and that girls can be strong individuals with minds of their own. That sounds like kind of a lot of messages, doesn’t it? There’s more, really, and I suppose every individual gets whatever out of it that they will. And honestly, sometimes the message is different even to me (depending on my mood), and I wrote it! I’m curious – what do you feel the central message is?

Most books are written in the third person. What made you decide to write this book as if Mina is speaking to the reader in the here and now?
At first, it wasn’t a conscious decision. It’s just how it came out. I’d written in first person, past tense before and doing it in first person, present really felt to me like it added a nice immediacy to the story. It’s an interesting way to write, because even in my own journals I would normally write in past tense. I like how it came out, though I do have to watch out for slipping back into past tense at inappropriate times.

Sucks to be me was written for teenagers. Are you at all interested in writing a book or books for younger readers, and if so why?
I do have at least one middle grade level manuscript that is partially completed and notes on a few picture books, but YA is definitely my first love. However, since we had a baby this year, I’m finding myself paying a lot more attention to picture books than I ever used to. There are a lot of good ones out there, but also a lot of not-so-good ones, especially in board books.

In addition to writing this book you run a huge book reviewing website. How did you get interested in this work?
I was an English major in college and I took as many classes in children’s and adolescent lit as I could (and science fiction). I was working in the corporate world (which I finally got out of for good in 2005) and reviewing allowed me to exercise the other part of my brain and do something I liked versus something that paid the bills. I still enjoy it, but it is hard to find time for now with Max (our little boy) and trying to get the sequel completed. Luckily, I have some great volunteer reviewers who help out at YA Books Central. The site couldn’t exist today without them.

Like you I review A LOT of children’s books and YA titles. Do you ever find that you really need to read something completely different to take a break?
Every now and then, but there’s so much available in YA that I don’t often feel that way. You can truly find anything and I mean ANYTHING for YA readers. Romance? Got it. Dystopias? Bingo. Hard core sci-fi steam punk? It’s there. Pretty much anything is out there, if you look for it.

What was your favorite children’s book when you were little?
I was a voracious reader, so it is hard to pinpoint just one book. I also went through a lot of reading phases. But, some of my continuing favorites include Mary Poppins by P.L. Travers (which is sooooo not like the Disney version) and Mistress Masham’s Repose by T. H. White and the Madeleine L’Engle books featuring Charles Wallace.

Here is a little bit more about Kimberly:
Kimberly Pauley loves a good book you can sink your teeth into. She majored in English at the University of Florida and took as many classes in adolescent fiction (and science fiction) as she could find. As her alter-ego, the Young Adult Books Goddess of YA Books Central (yabookscentral.com), she has been reading and reviewing books since 1998 and meeting tons of great authors. Sucks to Be Me is her first novel, though she has published various poems and short stories over the years that she will even periodically admit to. She now lives in Illinois outside of Chicago with a husband who loves her even though he hasn’t read a young adult book since he was about twelve and can’t quite comprehend what the whole fuss is about, a brand-new baby boy already completely surrounded by children’s books, and a devious cat who resembles a tub of lard covered in fur.
Posted by Marya Jansen-Gruber at 7:00 AM

Labels: bio, Kimberley Pauley, Sucks to be me, vampires

I love the books by Madeleine L'Engle. Charles Wallace is my favorite. I also love the twins =]

I just heard about Sucks To be Me and I'm planning on finding it somewhere or hanging out at Barnes and Noble to read.

Thanks for having me over, Marya! I enjoyed it. :-)