An interview with Steve Augarde, author of The Various trilogy. 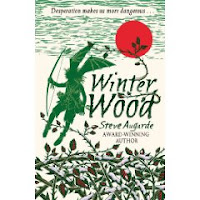 Good afternoon everyone. I recently read the third book in the Various trilogy, Winter Wood. In this series Steve Augarde explores a young girl's encounters with several tribes of "little people," and she discovers that she is not the first person in her family to meet the fairy folk. I was thrilled to be able to interview Steve, who is not only a superb writer, but who is also a wonderful illustrator and paper engineer.
Marya: The stories in your Various books are quite complex and involved. Did you create the history of the Various before you began writing or did it evolve over time?
Steve: It evolved over time. I had no idea when I began writing that this story would develop into such a massive project.

Marya: Did you draw on fairy tales and mythology at all to write your books about the Various?
Steve: The inclusion of elements from mythology and traditional fairy tale is deliberate, but I hope not too heavy handed. There are echoes of Little Red Riding Hood, Hansel and Gretel, and Robin Hood, as well as half-references to Greek mythology. Pegs isn’t so very far from Pegasus, after all. The purpose of teasing the memory in this way is to make the readers feel that the Various inhabit a real world from which some of the old legends might have sprung.

Marya: Why do the Various decide - in Winter Wood - that they need to leave and move on?
Steve: The Gorji (human) world is closing in on them. They know that sooner or later they’re going to be discovered. Their time is short.

Marya: The Various speak a number of dialects that are very interesting. Where did the inspiration for the dialects come from?
Steve: The dialect is mostly local Somerset – with a little bit of old European thrown in. ‘Renard’ for example is French for ‘fox’. ‘Corben’ for ‘crow’ has roots in the French word for ‘raven’ but could also be Norse or Germanic. The name for the character Maven-the-Green comes from the Yiddish word ‘maven’ meaning one who passes on knowledge. There are also one or two gypsy, or Romany, influences. ‘Gorji’ is close to ‘Gorgio’ the Romany word for a non-gypsy. ‘Hotchi-witchi’ is a Romany word for ‘hedgehog’.
It’s not necessary for the reader to know any of this. But I think that rooting dialect and language in this way can give it authority and credibility.

Marya: Did you believe in the “little people” when you were a child?
Steve: Probably. But ‘little people’ rather than ‘fairies’. Leprechauns, Will o’ the Wisp, Cornish piskies, Scots kelpies – these seemed more possible than winged Titania.

Marya: You did the illustrations for the Various books and they are quite beautiful. How did you create them?
Steve: I use scraperboard. This is a type of card, about the same weight as mounting board, but with a smooth clay surface. The technique involves inking this clay surface and then working into it with a scraperboard tool - scratching away the black ink with a blade, in order that a white underlayer shows through. The blades are available in various shapes. Scraperboard usually comes ready-coated with a black surface, but I prefer to use white board and apply the ink myself. This means that I can paint in the general framework of the illustration and there will be less ink to scrape away.

Marya: In addition to writing, you also illustrate and do the paper engineering for books. Which of your various (no pun intended here) hats do you enjoy wearing the most?
Steve: Whichever I’m not currently sweating under! None of it’s easy, so if I’m paper-engineering I’ll wish I was writing, if I’m writing I’ll wish I was drawing…
Being able to switch from one skill to another is how I’ve survived. Some might say I’m multi-talented, others might call me a jack-of-all trades. But it beats digging ditches either way.

Marya: Have you always loved to draw?
Steve: Yes. My dad was a pretty good artist – a sometime scenery painter before he got married and had to look for a ‘proper’ job. He was encouraging of me as a child, and there was always a pencil around. Paper was in shorter supply. At home I used to draw on the bits of card that came in Shredded Wheat packets.

Marya: How did you get into the children’s book world in the first place?
Steve: At art college. I was on an illustration course, and one of the projects we were given was to produce some chapter heading drawings for three Hans Anderson stories. Looking at the work of Arthur Rackham and Heath Robinson inspired me to try and find publishers who would give me a chance as a children’s book illustrator. And they did.

Marya: The writing muse is a fickle thing. Do your best ideas come to you at certain times or in certain situations?
Steve: Yeah – whenever the mortgage is due. Seriously, if you want writing to be your job you’d better write something that you can sell. And your work is more likely to sell if you believe in it yourself. Ideas are cheap and plentiful, it’s fashioning them into something you can believe in that’s the hard part. And children know. You can’t sell them short.

Marya: What kinds of books did you like to read when you were Midge’s age?
Steve: Malcolm Saville, Arthur Ransome, Rider Haggard, Captain Marryat – the usual suspects. I try consciously to write the kind of books that I would have loved as a twelve year old, and I never forget how wonderful books were to me at that age. I won’t knock something out for the sake of it. It has to come from the heart. If you can move yourself, then you’ll move others; a piece of advice my publisher gave me, and one worth hanging onto.
Thank you so much Steve.
You can find out more about Steve Augarde on his website.
Posted by Marya Jansen-Gruber at 2:12 AM