The Anniversary of the Klondike Gold Rush 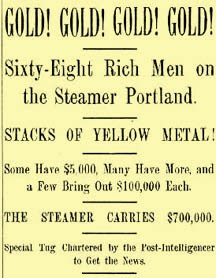 On this day in 1896 a party of travelers led by a man called Skookum Jim Mason discovered gold in Bonanza Creek in the Yukon. It all happened when Skookum Jim was heading north down the Yukon River looking for his sister Kate and her husband George Carmack. In addition to Skookum Jim, the group included Dawson Charlie and Patsy Henderson. The group found George and Kate fishing for salmon at the mouth of the Klondike River.

It is not clear who made the actual discovery, with some accounts saying that it was Kate Carmack, while others credit Skookum Jim. George Carmack was officially credited for the gold discovery because the actual claim was staked in his name. The group agreed to this because they felt that other miners would be reluctant to recognize a claim made by an Indian, given the strong racist attitudes of the time.

News of the discovery soon spread, and it wasn't long before people of all kinds were flooding into the region. Through the Looking Glass has reviewed an interesting collection of children's titles about this event. Take a look here to see the TTLG Klondike Gold Rush Feature.
Posted by Marya Jansen-Gruber at 10:46 AM