Not long ago I read a fantastic graphic novel - the first book in a trilogy - about what it was like to be in France during the German occupation. Here is my review of the title. 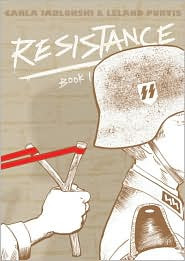 Carla Jablonski
Illustrated by Leland Purvis and Hilary Sycamore
Graphic Novel
Ages 12 and up
First Second, 2010, 978-1-59643-291-8
Paul, his sisters, and his mother live in a small French village. Paul’s father is a prisoner of war in a German camp somewhere, and Paul is doing what he can to help his mother. Though no battles are taking place anywhere near their home, life in Paul’s village is still very hard. Everyone is afraid of being denounced to the Germans, and feelings of suspicion and distrust are rife.
One day Paul goes to the hotel that his family owns, and he sees that the Germans have taken it over. He is immediately worried because the family who runs the hotel, the Levy’s, are Jewish, and if the Germans catch them who knows what will happen. Later that day that Paul finds Henri Levy in the woods and he tells his friend what has happened. Henri’s parents have disappeared, and Henri has nowhere to go where he will be safe. Paul decides that the only thing to do is to hide Henri in the family wine cave. He and his sister Marie have to keep Henri’s presence a secret, no matter what.
Later that same day Paul discovers that Jacques, the family vineyard helper, is a member of the Resistance, an underground group of people who are doing what they can to make life difficult for the Germans. Paul quickly offers to join the Resistance. He wants to do his part as loyal French citizen. At first Jacques refuses to consider Paul, but later he agrees to let Paul, and his little sister Marie, join the Resistance. After all, the Germans will never suspect that two children might be a threat.
This powerful and often disturbing graphic novel gives readers a very true to life picture of what it was like to live in during World War II. No one, not even the children, are untouched by the terrible things that are happening around them. They live in fear, and on occasion, they are called on to risk everything for a cause that is bigger than they are.

Tomorrow I will be posting an interview with the author, Carla Joblonski.
Posted by Marya Jansen-Gruber at 7:33 AM

What an interesting graphic novel. I'd really like to try to get my hands on this. Thanks for the review.