An Interview with Patrick McDonnell - Author of "South"

I'd like to introduce you to Patrick McDonnell. Patrick is the creator of the 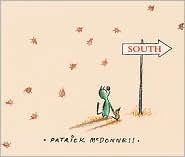 comic strip Mutts and his characters, Earl the dog and Mooch the cat have delighted people of all ages all over the world. In addition to drawing the strip, Patrick has created several wonderful books including Art and The Gift of Nothing. His new book, South would make a wonderful gift for almost anyone this holiday season.

Here is an interview that I had with Patrick:
1. Where did the idea for Mutts come from?
I had wanted to be a cartoonist since I was a child. But when I graduated from the School of Visual Arts I started my career as a magazine illustrator. One of my favorite ‘characters’ in my illustrations was a little white dog. That dog and his guardian eventually evolved into Earl and his Ozzie in Mutts. Overall, I’d say that MUTTS is about my love for animals and for the art of cartooning.

2. Did you base the characters of Mooch and Earl on animals you knew?
Earl is based on my first dog Earl. Earl and I spent almost 19 years together. In fact, Earl is the star of WAG!, my next children’s book, which will be coming out in Fall 2009. Mooch’s personality is a combination of all the cats I’ve known throughout my life, and my cat MeeMow is a source of a lot of Mooch material.

3. How did you come up with Mooch’s wonderful way of speaking?
Comics have a long history of characters having funny speech patterns (like Popeye, for example). So when I started MUTTS, I knew that I wanted at least one of my characters to pay homage to that tradition. A friend of a friend would say Yesh on occasion, and I thought it would be funny if Mooch adopted that word. But things got out of hand, and soon Mooch was also saying shmaybe. Before long, Mooch was shhhing all over the place.

4. You use your MUTTS strips and characters to make people aware of the plight of homeless dogs and cats. Have you always cared about this cause?
I have always had a love and deep concern for animals. But doing a daily strip that centers on viewing the world through their eyes made me more aware of how tough they have it in this world. After my becoming a member of the HSUS Board of Directors, I became acutely aware of the issues.

5. Aside from donating money to shelters, adopting a pet from a shelter, and spaying or neutering their pets, what do you think people can do to help homeless animals?
Well, these three things are a great start to ending the problem of homeless pets. Other things we can do are volunteering at the shelter (maybe simply by walking the dogs or playing with the cats), donating blankets or other items such as toys and food, and by telling your friends to not buy a new companion animal from a pet store. 99% of dogs sold in pet stores come from puppy mills.

6. In your children’s books you focus on simple yet incredibly important themes such as friendship. When you start creating a book do you know ahead of time what the theme of the book is going to be, or does the inspiration come to you when you put pencil to paper?
When I write my books I usually have a vague idea for a story in mind. When I put pencil to paper I then try to get out of the way and let the story tell itself. In a way, I feel it’s a form of meditation.

7. When you are drawing are you like your character Art (from your book “Art”) in that your imagination takes over?
ART is definitely autobiographical. Making art is a form of play for me and something I love to do.

8. What were you trying to tell people when you wrote your book “The Gift of Nothing?”
Some of the most important things in our lives are the small, everyday moments when we are simply present. Just being together with family and enjoying the time spent with them. The gift of life is all around us, and this book celebrates that gift.

9. When you started to draw the Mutts strips did you ever think that you would be creating stand-alone books one day?
Like comic strips, children’s books tell a story using words and pictures. As such, I’ve always had a fascination for them, and felt I would someday create a picture book. The daily MUTTS comic strip, however, consumed almost all my time for a long time. When I was able to make some space in my schedule, doing children’s books became a priority. I really enjoy this medium.

10. I believe that your books are suitable to readers of all ages. Was it your intention to create stories that are ageless or did this just happen by chance?
That’s so nice of you to feel that way about my books. Since the MUTTS comic strip is geared for all ages, I guess my children’s books have a similar ‘appeal’. Our sense of childhood wonder never leaves us if we open to that possibility.
You can find out more about Patrick and Mutts on Patrick's website.
Posted by Marya Jansen-Gruber at 6:38 AM

Labels: Art, Patrick McDonnell, South, The gift of Nothing

I think it's cool that you only do positive reviews. There's enough negativity in the world!