Recently, I listened to the audiobook The Magic Thief, and I recognized the voice of the narrator, Greg Steinbruner. Greg also narrated Larklight and the Larklight sequel, Starcross. I so enjoyed his narrative that I talked to the people at Recorded Books and got an interview with him. This is my first interview with an audiobook narrator and I hope you enjoy it.

1. Like many other audiobook narrators you are an actor. Can you tell us a little about your acting career?
I came to NY from Washington DC in 1989 to study 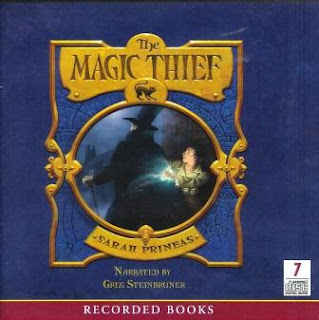 at NYU's Tisch School receiving training at both the Circle in the Square Program, and NYU's in house Classical Studio. My particular obsession, I guess you would say, has always been the kind of very humanistic actor driven theatre that you find mostly coming out of well funded companies from abroad. I was heavily influenced by Theatre Artists like Peter Brooke, and the physical theatre companies of Europe, like Theatre De Complicite as well as British companies like Cheek By Jowl. I didn't find much of work going on here, though I had some success working professionally as a young actor in a couple of American classical companies. To pay the bills I started to engineer and direct audio books at Recorded Books. Eventually, through a good friend at NYU I collaborated with Moises Kaufman on the original production of Gross Indecency: the three trials of Oscar Wilde, and we all found ourselves celebrated momentarily. Theatre is a fickle master however, and the unemployment line beckoned soon after that show closed. Inspired by that experience though I started writing, directing, and producing my own plays here in NY. I still take the stage when time allows and opportunity knocks, audition for commercials, that kind of thing. I try to write a new play every year, and direct every once and a while.

2. How did you get into the field of narrating audiobooks?
I started working in the studio I believe in 1994 or 1995 as an engineer. Having directed, edited, proofed, re-cut, re-mastered, CD cut, and in all other ways absorbed the process for almost 6 years I stepped away and took a much needed break from audio books in 2001. After that, it was quite a long siege to get studio director Claudia Howard to let me audition. She is a huge supporter of all of my endeavors, but she rightly is very careful to not let too many of the engineers through the door of the booth, without being sure that they have earned it (many of the engineers are aspiring actors.) The competition for these narrating jobs is very stiff, given the incredible depth of the NY acting talent pool. I had to get away from the studio for a while and earn a few more good reviews on stage before I started bugging her to let me read something. Larklight was the first thing she found for me and boy was it worth the wait. She wanted me for it after I auditioned, but the series had author approval on the narrator, so we sent a demo off to England with fingers crossed, and managed to pass muster. All those years of working on the production side taught me a huge amount about what the Recorded Books style demands. I was just incredibly fortunate. I spent six years working with all the great voices of unabridged audio. Like Conn to Nevery!!! It really helped me survive the first project. The learning curve is steep, and Larklight with all of it's incredibly distinctive characters was an incredibly challenging piece on which to cut my teeth.

3. Although you are an American, you have cultivated a very convincing English accent for your reading of The Magic Thief and the Larklight books. How did you achieve this?
Well, first, I am of fairly recent Irish/english descent, and there is a lot of vestigial music of that in my extended family, though they are barely aware of that. Second, I really love doing goofy dialects, and my biggest hero as a kid acting wise was Peter Sellers in the Pink Pather movies. I think of myself as working in that tradition, and of his early BBC radio work. Third, in the year and half I did Gross Indecency off broadway I played eighteen different british and irish characters eight shows a week. It's a work in progress, of course, and I'm always looking to get better. I do have some detractors for the dialect naturally, but I stand behind my work, because my nephew loves all my audio books and thinks I'm incredibly silly, and that's actually what matters most to me.

4. How are audiobooks created?
In the case of Recorded Books, painstakingly. The Recorded Books studio has an incredible research division. The narrators prepare the book, by reading and doing some basic work on character, in many cases with oversight and input from the Studio Director and researchers. Research looks up various arcane things that could trip the reader up in terms of proper pronunciation. Then the narrator and the book's director hit the studio and make it happen. It's actually pretty technical, and not easy. The goal is to come out of the sessions with a version of the book that is accurate, clean, well paced, and well performed. That can take many times as many hours in the studio as will end up in the final product. From there it goes through a lot of tender love and care to make sure that it is well presented on the media, either CD or tape, or now MP3. And that is all before it get sent to the main HQ in Maryland, where they make the CD's, tapes, packaging and do all the business stuff of marketing and selling.

5. Have you met the authors of the books that you have narrated, and if so what was it like?
I never have. I would love to, of course!

6. Has your experience as a narrator helped you in your career as an actor?
Definitely in the sense that is has kept my performing skills working, even in times when I'm not doing a lot of other kinds of acting. It is also an incredibly difficult thing to do well, and all that time in front of the mic really teaches you a lot about maintaining focus and sustaining a particular choice. So far narrating hasn't made me famous, I would say, but that was never exactly what I was after in any case. I really just love doing it. I have good friends who work at the studio, and it is an incredible collection of the best stage talent Claudia has assembled there. It feels like a creative home, and that is a very very tough thing to find in the performing arts right now.

7. Do you read children's literature for its own sake now that you are working in the field?
I have the same problem that I have always had since I was a child, which is that if I get my head in a book, I have a hard time getting out! I'm spending a lot of my time right now building my coaching practice, which isn't leaving me much time for reading strangely enough. Having said that, books were my life as a kid, so much so that I have made a career out of telling stories in one way or another.

8. Your recordings reach a very large audience, though of course you don't get to see them enjoying the stories the way you do when you are on stage. I imagine this must be very satisfying. What does it make you feel?
It is very different in that sense, and I have really, really appreciated hearing from the one or two people who have dropped me a line to say that they are enjoying the books. But yes, it is truly wonderful feeling, especially because the books I've been asked to read are all so special. I have a huge reverence for the worlds these writers create. They are real to me in the way they are real to children. Reading the books aloud makes me feel very connected to that very pure spirit of imagination that kids have and that adults so often lose. It is a great privilege to have that opportunity.

9. In addition to acting and narrating, you also have a blog where you provide tips to people so that they can learn how to be a more effective public speaker. Does this work compliment the other things that you do?
I was teaching acting, and finally figured out that I would have more students if I brought what I know about performance to the regular old world of business. So I have combined a pretty cutting edge performance methodology from my time studying and making physical theatre, experimental theatre and classical theatre, to communication best practices. It compliments the other things I do in many many ways. First of all it pays my bills and lets me live in NY and continue to be creative. But it also teaches me over and over again that human being have a deep need to communicate, and an incredible facility for it, but for whatever reason, we almost are never trained to make the most of our talents. I really enjoy making a difference in people lives that way.

Thank you Greg for this terrific interview. I learned a lot about you and about the world of audiobook creation.

Posted by Marya Jansen-Gruber at 7:17 AM

I'm kind of intrigued why did you called your article Untitled. Anyway, Greg Steinbruner is the best narrator for audiobooks.

Brilliant! To verbalize the genuineness this is a polite post concerning this topic. I got an untainted solution from here. Also I can refer to you all hwsolvers.com/math_homework here to get educational helps. All the same will wait for more posts from the blogger. Thanks a lot…….