Amelia Earhart - Lady of the skies 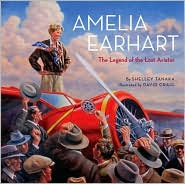 Before I moved to the U.S some eighteen years ago, (was it really that long ago?) I did not know much about Amelia Earhart. Then I worked in a school for a while, and began exploring the world of children's literature. I discovered that many children (especially girls) are fascinated by Amelia's story. As I started reading non-fiction titles about Amelia, I came to realize that flying was only one of the many things that she did with her time.She gave speeches about the role of women in the modern world, she taught, and she spent time with children and young women. She was, in short, a very remarkable woman.

For Amelia's birthday anniversary (July 24th) I reviewed an excellent book called Amelia Earhart: The Legend of the Lost Aviator by Shelley Tanaka and illustrated by David Craig. Shelley Tanaka has written many splendid non-fiction titles and this is one of her best. Here is my review of the book.

Amelia Earhart: The legend of the lost aviator

Amelia Earhart was not the kind of person to be put off when people told her that what she wanted to do was impossible, or inappropriate, or unladylike. More than almost anything Amelia believed that people should pursue their dreams. If need be, they should fight to do what they believe is important. Amelia certainly did; she ended up doing what she cared about the most: flying, teaching, and helping others.

Once Amelia found her place in the sky, she was unstoppable. She broke records and proved to the world that women can be great pilots, just like men. Flying rickety planes that were notoriously prone to breakages and problems, Amelia traveled long distances not only to break records, but to show women that the sky is indeed the limit.

When Amelia’s plane disappeared in July 1937, the whole world watched, waited, and then grieved. To this day, we do not know what happened to Amelia Earhart. We may never know, but her legacy lives on, and generations of girls and women still look to her for inspiration.

In this marvelous picture book Shelley Tanaka brings Amelia Earhart’s world to life. With numerous quotes from Amelia’s writings and speeches, the book beautifully captures Amelia Earhart’s indomitable spirit and her sense of adventure. Packed with information, illustrations, and photographs, this title is a must for all young Amelia Earhart fans.

If you are interested in purchasing this title please consider doing so through The TTLG website to help support this blog. Many thanks.

Posted by Marya Jansen-Gruber at 10:42 AM