A blast that shook the world. 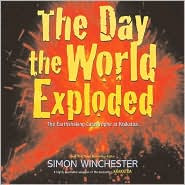 On August 26th, 1883, a small island in the Sunda Strait between Java and Sumatra blew up. The explosion was heard up to 5,000 kilometers away and the dust from the eruption affected sunsets in far away New England. Not long ago I read and reviewed a fantastic book about this event. Here is the review.

The Day the World Exploded: The Earthshaking Catastrophe at Krakatoa

When the volcano on the island of Krakatoa blew itself apart on August 26th, 1883, it had a global effect. Not only was the world’s climate affected for months to come, and not only did thousands of people die, but for the first time in human history a catastrophic event was no longer a local happening. Thanks to the telegraph machine, within hours of the eruptions people in the Netherlands knew what had occurred. Scientists and others were able to make the connection between the events in the Sunda Strait and the strange sunsets that were being seen all over the world. People who owned barographs - instruments that measure atmospheric pressure – were able to figure out that a shock wave from the eruption and gone around the world no less than seven times. The explosion on the tiny little non-descript island had brought the people of the world together and the world quite suddenly seemed to become a much smaller place.

Scientists have now figured out that Krakatoa had a long history of violent eruptions. The explosion which took place in 1888 was not an isolated event and the people in the area had plenty of warnings that something big was going to happen. Indeed weeks before the big eruption tourists from the town of Batavia (Jakarta) went to take a look at the smoking mountain, and some foolhardy souls even climbed the main cone to look into the crater.

After the 1888 eruption was over, all was quiet in that area for a while. And then, in 1927, volcanic activity began anew. By 1930 a small island that was half a mile long and twenty feet high could be seen. This island was named Anak Krakatau (son of Krakatau) and by 2000 it had grown to the height of 1,500 feet above sea level. The island is still growing and it is active on a regular basis.

In this fascinating and superbly presented book renowned author, Simon Winchester, not only tells the story of one of the world’s most astonishing natural disasters, but he also explains why volcanoes form; he gives an account of the history of the Sunda Strait area; and he explains what the impact of the volcano’s eruption was on the world as a whole. The writing is interesting, punchy, and highly entertaining, and readers will come to appreciate how powerful volcanism can be. With numerous illustrations, diagrams, maps, and photographs, this book will delight anyone who has an interest in this subject.

Posted by Marya Jansen-Gruber at 9:10 AM