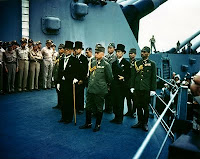 When I was still quite young, I learned two things about my father that astonished me. One was that he was born in 1919. I had no idea that my father was "so old!". He certainly did not look it. The other was that he had served in the Indian Airforce, and had done his part to fight the Japanese during World War II. I even got to look at his war medals.
My father told me a few stories about his war experiences, and one that I will not forget was his account of the surrender that he witnessed on August 15th ,1945. For him, and so many other men fighting in the war, it seemed as if the Japanese would never give up. The relief he felt on this important day was enormous. At last he could go back home and resume his life. At last he could leave death and conflict behind.
While I was growing up, on August 15th, my family would get together with our closest friends to celebrate Indian Independence Day and V-J Day (Victory Over Japan Day). Many people also call this day Victory in the Pacific Day or V-P Day. For some years I did not celebrate the day, because I was in college and then trying to find jobs. Then, after I got married, I started celebrating August 15th with my own family. This year my mother is visiting us (my father is no longer with us) and we will be hanging out the Indian flag and remembering my father's stories about his war.
I, of course, have a personal reason for having an interest in War War II, but I do think everyone benefits when they learn about events that took place in the past. Learning about history and about the people who affected history helps us to better understand our world. It helps us to appreciate what we have, and the sacrifices of our forebears. My dear father gave up his scholarly life as a professor to serve his country, and I am enormously proud of him for doing so.
Over the years I have put together a large collection of book reviews about World War II books. I hope this feature will help you to find books for your children that will make it easier for them to better understand this war.
Posted by Marya Jansen-Gruber at 9:07 AM