Eighty-nine years ago today the 19th Amendment to the U.S. Constitution was ratified giving American women the vote. It was a long battle for women to get the vote, and the women who began the fight in 1848 at Seneca Falls, NY did not get to see the fruits of their labors. It was their daughters and granddaughters who were finally able to cast their votes in national elections. The Ninteenth Amendment came into law on on August 26th, 1848, which is now celebrated as Women's Equality Day.

Over the years, many people have written wonderful fictional and non fictional books about the women's rights movement. You can see my reviews of some of these titles on the TTLG Women's Right Movement feature page. For younger readers I would highly recommend Mama went to jail for the vote by Kathleen Karr. Here is my review of this title: 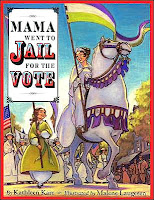 Mama Went to Jail for the Vote
Kathleen Karr
Illustrated by Malene Laugesen
Picture Book
Ages 5 to 9
Hyperion, 2005, 078680593-5
"Women were meant to be an ornament to man, and to comfort him after his labours." This is what Susan Elizabeth's Papa thinks. Her mother however has very different ideas, thinking that "woman are in chains" and that it is the duty of every enlightened woman to go out and battle for the rights of all women. In short Susan Elizabeth's mother is a suffragist and every day that she can she joins other women demonstrating against the oppression of women.
Of course for Susan Elizabeth this is all hard to understand until her mother explains to her how women in America have no say in how their country is run. Susan Elizabeth starts to get interested in her mother's cause and wants to help and so she does, in her own small way. When Susan Elizabeth's mother spends months picketing outside the White House in all weathers, Susan Elizabeth begins to think that President Wilson needs new glasses for he does not seem to see the women and their signs.
Then, one dreadful day Susan Elizabeth's mother is arrested and Susan Elizabeth's life gets infinitely more confusing. Being a plucky and determined young lady Susan Elizabeth takes matters into her own hands. Isn't she after all one of the soldiers in her "Mama's Army?"
The "war" that Susan Elizabeth and her mother take on is superbly portrayed in this picture book which captures the essence of the struggle that the women's rights "soldiers" faced. An interesting "Historical Note" in the back of the book provides further information about the women's rights movement.

You can read a brief history of the women's rights movement here.
Posted by Marya Jansen-Gruber at 1:20 PM