February is Black History Month, and in honor of this event I am going to share a few special reviews with you during the month. Today I have a review of a very special picture book, a book which delighted me when I read it not long ago. 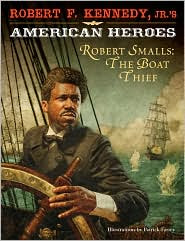 Robert F. Kennedy Jr.
Illustrator:  Patrick Faricy
Nonfiction Picture Book  Series
For ages 10 and up
Hyperion, 2008   ISBN: 1423108027
Robert Smalls was a slave in . He worked hard to learn useful skills, and by the time he was in his early twenties Robert was a skilled sailor and navigator, despite the fact that he was illiterate. He knew the waters along the southern coastline intimately and was highly valued by the people he worked for.
In 1862 Robert was working as a sailor on the Planter, a powerful side-wheeler. The
Planter was being used by the Confederacy to patrol , to lay mines, and to transport troops. More than anything Robert wanted to be free. He wanted to be sure that his baby son could not be sold like a piece of merchandize. Carefully Robert put together a plan, and on one night in May Robert and several other slaves stole the Planter and took her to the Union navy. Finally Robert was free, and he chose to serve the Union cause. His courageous theft of the Planter was just the beginning of what would be an extraordinary career.
In this fascinating American Heroes title, Robert F. Kennedy Jr. gives his readers a description of the life of one of ’s great heroes. Readers who have never heard of Smalls will be amazed that one man was able to do so much, and that one man did so much for his country despite numerous obstacles that lay in his path. Beautifully complimented by Patrick Fariey’s stunning artwork, this is an exceptional picture book biography.
This is one of several excellent nonfiction books that Robert F. Kennedy Jr. has written. Another one is called Saint Francis of Assisi: A life of joy
Posted by Marya Jansen-Gruber at 8:16 PM